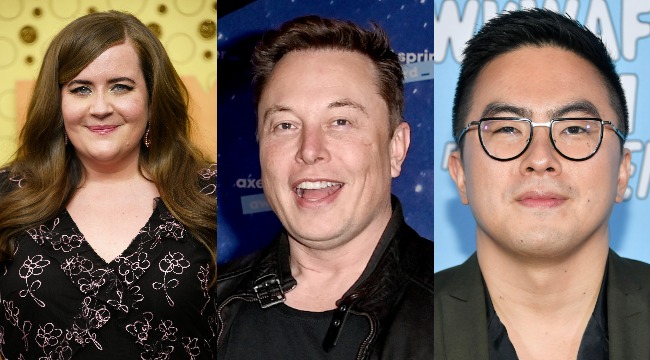 If I’ve learned one thing working on this internet hellscape, it’s to never assume something is going to be accepted by everyone. Even puppy videos on YouTube have downvotes. COVID vaccinations have become fertile grounds for online arguments that devolve into personal attacks.  We couldn’t even decide on the color of that damn dress.

But I couldn’t help but be surprised at this Elon Musk SNL controversy. The sketch show announced this week that the TESLA founder and CEO will host SNL on May 8th, becoming the first non actor/athlete to host the show since Trump did in 2015.

SNL’s choice to validate Musk chapped many digital asses because the word “billionaire” is akin to “axe murderer” at this point in the culture.

We need a constitutional amendment barring billionaires from entertainment and entertainers from politics. https://t.co/kDvmZ0gMdP

A loud online minority is to be expected, but several SNL cast members have publicly piled on.

In an Instagram story, cast member Bowen Yang wrote “what the f— does this even mean?” as a caption to Musk’s tweet from over the weekend which read, “Let’s find out just how live Saturday Night Live really is.”

I love that Bowen Yang is publicly showing how much he hates that Elon musk is hosting the show he works on 😂 I mean he’s right pic.twitter.com/CDKRKZs5Eg

Aidy Bryant took a more political approach, sharing a tweet from Bernie Sanders about wealth inequality in America. At the time of this writing, Elon Musk is worth an estimated $179.4 billion, see-sawing back and forth with Jeff Bezos as the world’s richest human.

the absolute shade from Aidy Bryant after announcing that @nbcsnl will have Elon Musk as host. good for her pic.twitter.com/G1K4R0sNEq

“Only CEO I want to do a sketch with is Cher-E Oteri” over a photo of former “SNL” castmember Cheri Oteri.

Sometimes I think we need to stop and reflect on how privileged we are as Americans to have the bandwidth to be upset about this.