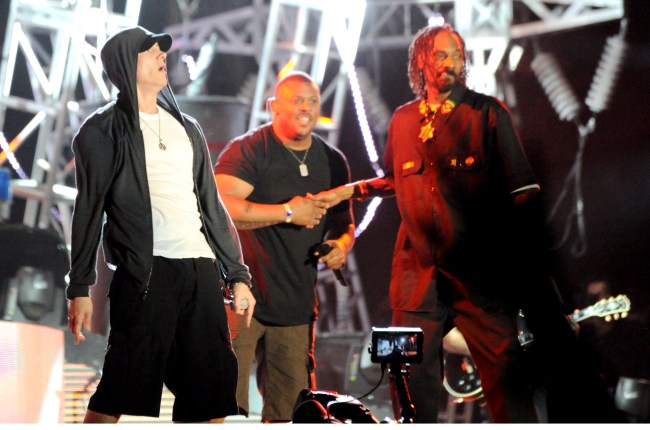 During an appearance on the Apple Music radio show The Ebro Show, Calvin Cordozar Broadus Jr. shared details of the debut album for Mount Westmore – a hip-hop supergroup of Snoop Dogg, E-40, Too Short, and Ice Cube.

“You know what’s up next right? Mount Westmore album coming out in the first quarter of 2022,” Snoop told host Ebro Darden. “We pullin’ all the way up with videos, maybe a potential motion picture.”

“Oh, just a sneak peek… I’ve got a duet… with the great white hope. Our first one,” he exclaimed. “You figure that out who am I talking about. Eminem. You f–king right. That’s a monster jam!”

The Snoop Dogg collaboration with Eminem is titled “From Detroit to the LBC” – a reference to the rappers’ hometowns.

Snoop revealed the reaction that Dr. Dre had when he heard the collaboration between the two legendary rappers, “It’s so good Dr. Dre said ‘Why you ain’t give me one like that?'”

“Mount Westmore is a beautiful piece of organized confusion,” he added. “And there is only one feature. Eminem. Do the math. We not playing!”

In a previous interview, Snoop discussed how both rappers forced each other to raise their game on the upcoming collabo.

“There is Snoop Dogg and Eminem song on my Westmore album. It is called From Detroit to the LBC, that’s Mount Westmore album that is coming out in January and Eminem and Snoop single is featured on there,” Snoop proclaimed. “And that motherf–ker slapped. That s–t is HUH!”

“It was very challenging for me. Eminem really f–king shot at me,” Snoop said. “He shot his shot and as a rapper that’s what you want when you get a feature, to have to work you f–king a– off. He is going that hard because he knows I’m going to match him on the same level and that’s what it is when you making records with people that you love. It’s competitive but for the right reason. To bring the best out of each other.”

RELATED: Snoop Dogg, Seth Rogen And Jennifer Aniston Give Advice On Smoking Weed For The First Time On ‘The Howard Stern Show’

Snoop Dogg said he and Eminem don’t have any beef.

“We love each other. If you got siblings you know that you have misunderstandings and disagreements. That s**t happens,” he said of his relationship with Marshall Mathers. “But the beauty of it all is that If I’m wrong I know how to call Marshall and apologize. ‘I was wrong bro, do you forgive me? No problem, let’s roll on.'”

“I feel like this was necessary because I was the reason why it became what it was and I felt like I could be a reason to stop it,” he continued. “For the sake of family and for the sake of my love for Eminem and Dr. Dre and what we have built, that was the only thing to do. I probably called him four-five months ago. We really love each other. We don’t want public to spin on something that’s not even that serious. We truly respect each other. We brothers man.”

Snoop and Eminem will perform at the 2022 Super Bowl with Dr. Dre, Kendrick Lamar, and Mary J. Blige.

“Shout out to Jay-Z and Roger Goodell because them was the last two pieces to the puzzle to make it actually official, like a referee with a whistle,” Snoop said. “Because it was a bunch of snags and hurdles that you all didn’t hear about, because some of us got criminal records and backgrounds that they tend to want to bring up, even though we disconnected from that. But the spirit of who we are overwhelms everything, and the love that we have just trumped it all to where people like, whatever they did in the ’90s ain’t relevant to what they doing right now, these are grown men. These are business men, and they established themselves as positive role models.”

Earlier this year, Snoop joined Def Jam Recordings as an executive creative and strategic consultant – “A new role that will allow him to strategically work across the label’s executive team and artist roster.”