Snoop Dogg, Seth Rogen And Jennifer Aniston Give Advice On Smoking Weed For The First Time On ‘The Howard Stern Show’ 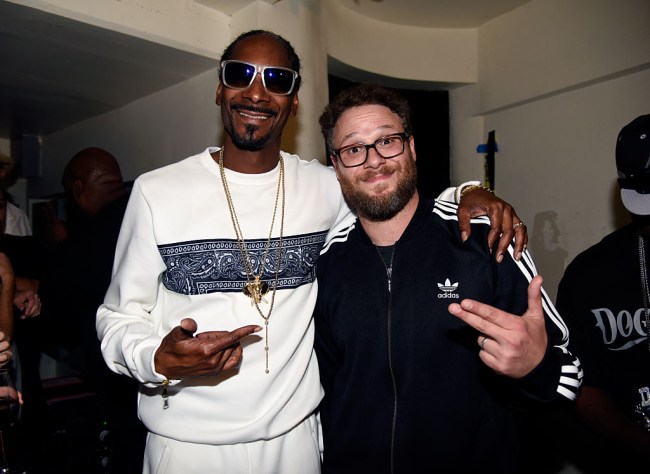 For those who have not tried marijuana yet and are debating smoking weed, your good friends Seth Rogen, Snoop Dogg, and Jennifer Aniston are here to guide you through your first cannabis experience with their expert advice.

Seth Rogen and Snoop Dogg appeared on The Howard Stern Show this week, and you’ll never guess what they discussed? If you answered “weed,” give yourself a cannabis gummy.

One of the radio show’s producers claims that he had never done weed before and was looking for advice for busting his cannabis cherry. Who better to ask for weed wisdom than Snoop Dogg and Seth Rogen. JD Harmeyer has never smoked marijuana in his 39 years on the planet, but that is all about to change thanks to Seth and Snoop.

Howard Stern asked his pot-loving guests what advice they would give to someone who was going to smoke weed for the first time. “These guys know how to do weed and you gotta be careful,” Stern said. “Tell me if this is right: Maybe three hits?”

Rogen respectfully disagreed and replied, “I’d start with one.”

Snoop was even more conservative, “I’d say a half of one.”

“This is from two guys who have had too many motherf*ckers come up and get way too high,” Rogen said.

“And fall out,” Snoop added. “I have a lot of people [say], ‘My dream is to smoke with you.’ Bang. He dying. I’m gone.” This is like a MasterClass right here, they should be charging money for this invaluable knowledge.

Stern’s producer will be delving into the devil’s lettuce from Lowell Farms: A Cannabis Cafe in Los Angeles, which opened up earlier this month and became the country’s first marijuana cafe. Snoop and Rogen carefully studied the menu from the Cannabis Cafe to suggest a strain that would be perfect for a first-time pot smoker.

Snoop recommended that the producer starts with a sativa “because it’s a little bit lighter, it’s more of an introduction.”

Rogen agreed with Snoop’s suggestion of sativa, but added that the cannabis should be strong enough to “make sure you feel it.” “I’m talking about what percent [of THC] should he start [with],” Rogen said. “But again, one f*cking hit.”

Any first-time marijuana smoker should take the advice from Rogen and Snoop seriously since both celebrities have been smoking weed for decades, plus they both have their own cannabis companies. Rogen’s cannabis company is named Houseplant, and Snoop has LBS.

Stern asked the infamous potheads: “Are they ruining the fun of weed? Now we gotta read a f*cking menu.”

“But see, when you’re a weedologist, you know this sh*t,” Snoop replied. “He read through the book just like that. He knew that motherf*cker front and back.”

Jennifer Aniston also appeared on The Howard Stern Show and gave the first-timer some sound weed advice. “Just pace yourself,” Aniston warned. The Hollywood actress added, “It could be the best day of your life or the worst day of your life.”

Jimmy Kimmel also gave Harmeyer some pointers for his first time toking up. “He gave me some advice, he said stick to a couple puffs.”

RELATED: You Can Buy View Askewniverse-Themed Weed Directly From Jay And Silent Bob But Just Remember To Put Money In Jay’s Hand