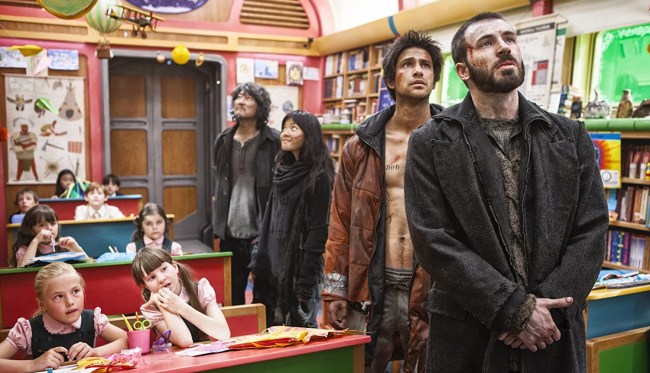 Six months ago, you could easily consider 2013’s Snowpiercer to be an under-the-radar hit. While conventional wisdom might tell you that a science fiction action film from an internationally acclaimed director that stars Chris Evans — who was a few years into playing Captain America at the time — would be a massive hit in the United States, the reality is the film barely made a mark on moviegoers when it was first released.

You see, Snowpiercer was never actually given a wide release in the States, as The Weinstein Company (yes, that prick) owned the rights to the film and only released it in eight theaters in select cities due to a dispute with director Bong Joon-ho. As the story goes, Harvey Weinstein wanted 20 minutes of footage cut and other edits to be made, but Bong stuck to his guns and refused.

The film would go on to find a second life on Netflix, though, as it’s essentially been available on the service since 2014. Even still, despite its success in the streaming after-life, Snowpiercer was still far from being the massive hit it could and should have been. And then Parasite happened.

PREVIOUSLY: Under-The-Radar Shows To Binge During Quarantine: ‘The Leftovers’ On HBO

By winning Best Picture, Best Director, and Best Screenplay at this year’s Academy Awards, Bong Joon-ho placed himself firmly in the center of American pop culture, therefore making his entire back catalog one of the hottest commodities in the industry (Parasite, for example, set tons of streaming records on Hulu in its first week).

What makes Snowpiercer so enticing for American audiences, though, is that unlike the rest of the auteur’s films, it’s not only mostly in English but stars an established movie star, giving movie fans the best of both worlds: the artistry of Bong Joon-ho and the popcorn Blockbusterization of American cinema.

And man, re-watching it last night, let me tell you: it’s a fucking wild movie. 150MPH at all times — there are rarely, if any, moments to catch your breath. While its metaphors about capitalism may be a little heavy-handed for some, the message remains deftly poignant all the same. The dialogue is sharp and the twists are both earned and intelligent. The action is simultaneously gruesome and stunning. Evans puts forth a true movie star performance, reminding everyone — once again — that there’s a legitimate dramatic actor under that superhero square jaw. When it comes to the things that audiences hope to see when they watch a sci-fi/thriller/action movie — intricate and epic fight scenes, mind-blowing twists, stunning visuals — Snowpiercer has it all and then some.

You’ve probably had people suggest this movie to you in the past, so consider this as a sign that it’s probably time to listen: go check out Snowpiercer. It’s on Netflix right now.

P.s. There’s also a ‘Snowpiercer’ series that’s hitting TNT in May. I’ll toss that trailer below as well.