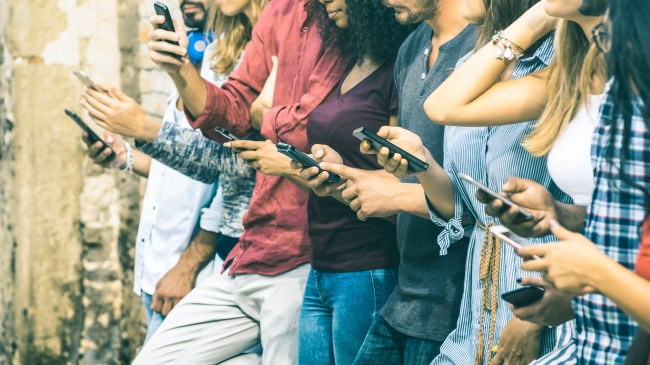 Everyone knows someone who is addicted to their phone. Sure, we play it off as mostly a joke, making comments like “Man, you need to check your ass into rehab,” when that slave to tech cannot get through a bucket of beers and some buffalo wings without checking his social media for the latest likes, comments and digital drama. At first, we play this off as just some annoying attention deficit disorder thing, like all that bastard really needs is a solid script for Adderall and everything would be well and good. But then, as time progresses, we start to notice him engaging in some bizarre behavior that is not dissimilar from the types of desperate, low-rent “gotta dollar” tactics that the residentially challenged often employ outside liquor stores and truck stops.

The situation becomes truly problematic the one night when you and the boys take off for a night of drinking and that Twittering imbecile realizes that he accidentally left his phone on the charger back at home.

That’s when all hell breaks loose. “Dude, I forget my phone,” he can be heard saying while flipping and flopping all over the back seat like a man who just found out that he’s been sex trafficked. He’s back there grabbing and fingering every orifice of his body in a quest for the key to what is happening out there in social media land. It’s a sad state of affairs. He’s hit rock bottom. Yes sir, the monkey has mounted, fully erect and ready to party. Although this wretch might not come out and say that he’d be willing suck someone off for an Instagram fix, you had better damn well know that he’s thinking it.

But come on, could your friend really have a legitimate addiction to social media? Well, according to a new study, the situation is just as dire as if the guy was addicted to hard drugs. Researchers at the University of Michigan found that people who become social media addicts engage in the same kinds of unsavory behaviors as those with a twitching itch for dope. The results of this study, which were published in the latest Journal of Behavior Addictions, shows that even though a social media jones is only a psychological dependence, it makes people act like full-blown junkies. And as we’ve seen in movies like the Basketball Diaries and Requiem for a Dream, that never ends well.

“Around one-third of humans on the planet are using social media, and some of these people are displaying maladaptive, excessive use of these sites,” lead study author Dar Meshi, told The Tribune. “I believe that social media has tremendous benefits for individuals, but there’s also a dark side when people can’t pull themselves away. We need to better understand this drive so we can determine if excessive social media use should be considered an addiction,” Meshi added.

This is not the first time social media use has been explored in hopes of learning more about its grips on the human mind. Last year, a study commissioned by Fox News found that social media was as addictive as cocaine. Health experts determined that receiving “likes” and “comments” gave users the same feel-good effects as dopamine-releasing drugs. “Facebook likes and comments activate similar parts of the brain as opioids, where each like or positive comment activates the reward system and the brain releases dopamine,” said Dr. Tara Emrani, a psychologist at NYU Langone Health. “So, arguably, the feelings/experiences of the brain, as a result of Facebook likes or comments, is similar to those resulting from cocaine, albeit less intense,” she added.

Although social media addiction is not likely to cause your buddy to end up dead from a fatal “comment” overdose, experts say it could cause a person trouble when it comes to keeping up with their studies or holding down a job. It’s difficult to imagine that there could come a day when a portion of the homeless population is attributed to an addiction to Facebook, Twitter and Instagram, but, judging by the state of the world today, one in which almost all communication between humans seems to gravitate toward the use of our thumbs, it might not be too far-fetched. So, help your friend get a hold of his social media addiction before the shit hits the fan.

We’ll be first to admit, however, that staging an intervention because a member of your crew can’t unplug is about as dumb and pussified as it gets. If beer and chicken wings cannot keep that fool off his phone, what good is he in the first place? Cut your losses and find a new friend that doesn’t suck.