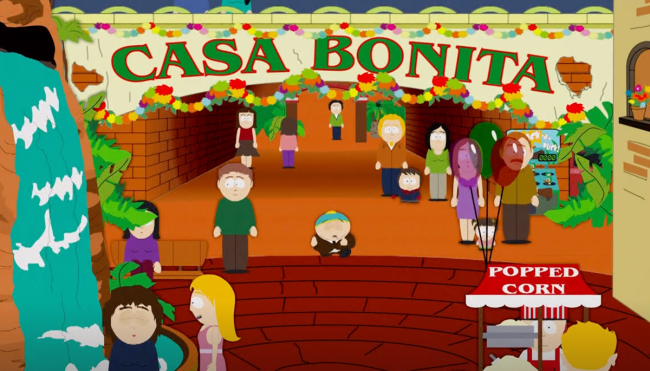 South Park has featured some incredibly absurd scenarios since it debuted on Comedy Central all the way back in 1997.

As a result, it’s safe to assume many viewers were under the impression Casa Bonita—the Mexican restaurant at the center of an episode from season seven featuring a rustic village, a lush indoor jungle, and cliff divers leaping off of a waterfall—was just another surreal concept spawned from the wild imaginations of the Trey Parker and Matt Stone.

However, nothing could be further from the truth,  as every single area Cartman visited while evading police inside that fantasy land could be found inside the real, actual Casa Bonita that opened up for business on Colfax Avenue in Lakewood, Colorado (located just west of Denver) in 1974.

I imagine I’m far from the only person who was inspired to make the pilgrimage to Casa Bonita during a trip to Colorado because of South Park. I can personally attest the show nailed the depiction, but there’s perhaps no better way to sum up the overall experience than the fact multiple locals who heard about my plans had the exact same reaction: “Whatever you do, do not eat any of the food” (although you were required to order a meal in order to gain admission).

The fact that Casa Bonita was open for more than 45 years is a testament to its appeal, but the good times came to an end last year when its owners filed for bankruptcy after it fell victim to the pandemic.

However, it quickly found some new owners in the form of Parker and Stone, who swooped in to buy Casa Bonita while pledging, “We are going to do everything we can. We want to make it right and make it amazing.”

It’s been a year since the duo set out to give the local landmark the facelift it deserves, but based on what they had to say while discussing the ongoing renovations with The Denver Post, the masterminds behind South Park were not prepared for the many, many issues they’ve encountered.

Stone summed up the overarching problem by saying, “The previous owners deferred maintenance in an almost superhuman way,” and Parker also declined to mince his words while elaborating on those struggles:

“Have you ever seen Kitchen Nightmares? It’s the very, very worst one of those you could possibly ever imagine.

What we thought would be, ‘Oh this will be cool. We can buy this and open it and it’ll be around again,’ turned into ‘Oh this is going to be what we have to put all our money into and hope that it works….’

Anyone else that’s said, ‘Oh I wanted to buy Casa Bonita,’ they wouldn’t have made it because this is going to cost so much and it’s really dumb,” said Parker. “We absolutely should bail and stop spending money, but we’re committed now.”

The litany of setbacks means Casa Bonita currently has a projected reopening date of “someday,” but Parker and Stone are obviously intent on seeing the project through regardless of how much money their decision to commit to this particular bit will end up costing them.