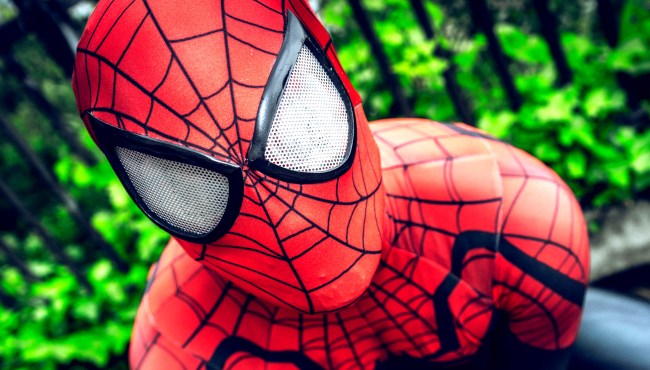 University of North Carolina students got a trick and a treat a little bit early for Halloween this week when dozens of people dressed up in Spider-Man constumes swarmed the school’s Davis Library Tuesday evening.

Student Brian Keyes was one of the people inside the library who recorded video of the bizarre event and posted it to Twitter. In the footage, you can see Tar Heel students were understandably left gobsmacked as the pack of Spider-Men strolled into the library, walked up to students, typed on computers, climbed on the tables, pretended to shoot spider webs, and then walked back out without any explanation whatsoever.

University of North Carolina campus police said the incident was not reported to them and didn’t believe any students were in danger, according to CBS-17.

Hannah Lang of The Daily Tar Heel wrote on Twitter, “not me telling my professor that I didn’t do the homework last night bc of a breaking news incident involving 40-60 individuals in spider-man costumes.”

can confirm, i did make this joke in the slack https://t.co/rbkTg0MZag

The event was coordinated by Henry McDonald, a senior member of Sigma Chi fraternity, and the majority of the people dressed up were friends and members of the fraternity.

McDonald said he wanted to spread the Halloween cheer, so he told many people they should also dress up as Spider-Man and go around campus.

“There were easily 40 to 60 of us and my original plan was to go onto campus and squirt people with the webs,” McDonald said.

So there you go. If you had “fraternity prank” in the pool, you’re a winner. And if you happen to be in the Raleigh-area on Halloween McDonald said “you should probably look out for us at Benny’s on the night of Halloween.”