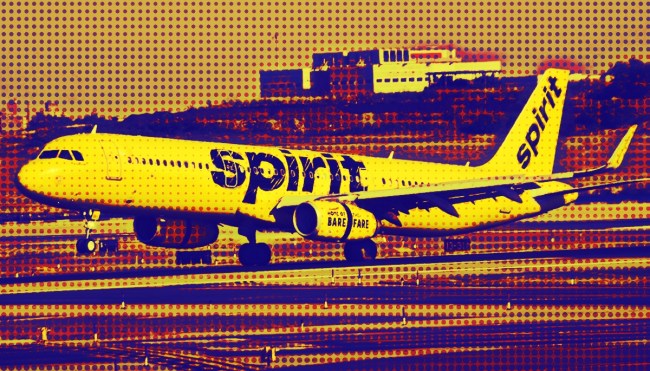 Earlier this month, airports around the United States were thrust into chaos after “a series of weather and operational challenges” resulted in Spirit Airlines canceling over 2,000 flights in an attempt to “reboot” an aviation operation that apparently has more in common with a spotty WiFi router than I ever would’ve imagined.

Earlier today Spirit Airlines canceled hundreds of flights due to "a series of weather and operational challenges" leaving people stranded. This was the scene from Hartsfield Jackson this morning..pic.twitter.com/0RRNjEUiUH

HOURS LONG LINE here at BWI where Spirit Airlines has canceled a fifth day of flights. Many here planned to travel yesterday only to find out flights today were canceled, too. pic.twitter.com/oppc4QLtkF

This is just flat out sickening. @SpiritAirlines

Women & children are forced to sleep on the floor because pilots and other employees have walked out on their job.

You literally have babies crying themselves to sleep.

One woman has been here for 3 days. Going on 4 now. pic.twitter.com/Nly7Wc5CVv

Like I said yesterday, they may need Air Marshals on Spirit flights with all these cancelations. pic.twitter.com/ZrwO77BpoS

Over the weekend, CEO Ted Christie took a page out of the BP playbook when he spoke with USA Today and shared the truly revolutionary strategy Spirit has decided to harness in an attempt to make things right, saying, “It starts with an apology, but what it really is: We’re going to earn the trust.”

Social media was predictably flooded with complaints from customers who had their travel plans derailed by the spate of cancelations—including a number of people who were not exactly satisfied by the $50 travel vouchers they received as an apology.

Spirit cancelled my flight 8 times I’m really bouta fly this plane, I been on YouTube for the past hour

So Spirit canceled my flight today. No refund or other options. But hey I got a $21 meal voucher that expired yesterday #spiritairlines pic.twitter.com/FE8q7y3nQ1

thanks @SpiritAirlines for cancelling all of my flights to try and move back home after living over 2,000 miles away. you’ve cost me an extra $1000. you will absolutely never be getting my business again.

NOT SPIRIT SENDING ME TWO $50 TRAVEL VOUCHERS. They will really send me everything BUT a refund😭😂

@Spirit, I asked that you give me back for my full refund $492.06 for my CANCELLED flight. There aren’t any flights going out other than Wednesday. We don’t want your $50 voucher, we want the full refund. https://t.co/doSgUi4nZ9

On Tuesday, the aforementioned outlet shared a number of horror stories from travelers who recounted the ordeals they were forced to endure courtesy of Spirit Airlines, with one dissatisfied passenger saying “‘I felt like I was held hostage” and another describing the saga they were subjected to as “a parade of incompetency.”

I can certainly understand why so many people were frustrated by the living nightmares they were forced to endure, but with that said, I also find it kind of hard to sympathize with anyone who had the option to buy a ticket from another airline and still willingly booked a ticket on Spirit, as anyone who’s even somewhat familiar with how the budget carrier operates knows that “A Parade of Incompetency” has been its unofficial slogan for decades.

I have a feeling I’m far from the only person whose first experience with Spirit Airlines (which is basically the DoorDash of flying) was also their last, as I made it my mission in life to never fly with them again after being drawn in by their cheap fares during spring break in college before ultimately dropping more on the various (and virtually unavoidable) fees that serve as its bread and butter than I did for the round-trip ticket.

At the risk of being accused of “victim blaming,” I know that some of the travelers who were subjected to the hellish ordeals they were recently forced to endure didn’t have any other options when it came to their airline of choice (whether it was due to a lack of alternatives or financial realities that made Spirit the only viable pick). However, I have a very hard time believing the bulk of the people who were impacted weren’t at least presented with the opportunity to take their business elsewhere but eventually decided to go with Spirit Airlines because it put the smallest dent in their wallet.

Spirit’s website doesn’t offer a ton of information concerning its refund policy concerning canceled flights, but it does note that all of its fares are classified as “non-refundable” (although it’s worth noting federal regulations seem to require airlines to compensate travelers who have their journey impacted through no fault of their own).

Is it kind of a scummy practice? Sure, but as I mentioned, it’s not exactly a secret that Spirit Airlines doesn’t have a stellar track record when it comes to its customer service. I’m honestly surprised the carrier doesn’t require passengers to agree to a non-disparagement clause when they book a flight, but even if customers aren’t legally barred from airing their grievances, I think it’s time for society to collectively agree that anyone who willingly agrees to fly with them when there are other reasonable options on the table should lose their right to complain about anything that happens after they purchase a ticket.