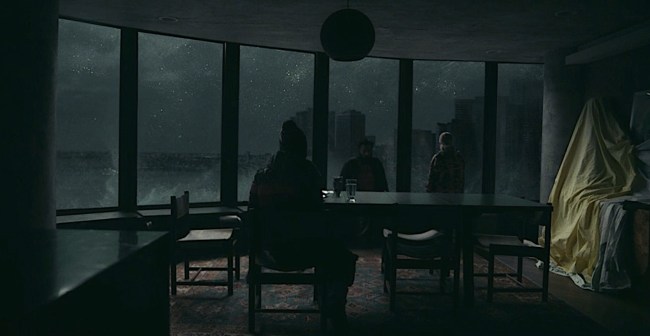 “The Constant” from Lost. “Ozymandias” from Breaking Bad. “International Assassin” from The Leftovers. To become an all-time-great television show, you must, at least, have one classic episode, an episode that operates at the peak of its powers, converging all of the things that make the format worth watching: thematics, plotting, cinematography, scoring, character development — the works. With “Goodbye My Damaged Home”, HBO Max’s Station Eleven officially enters that elite pantheon of excellence in the history of television.

Since its pilot episode, the most compelling plot thread of Station Eleven has far and away been the early days of the downfall of civilization, tracking how the series’ two main protagonists — Kirsten and Jeevan — navigate the immediate aftermath of the world-ending pandemic. Station Eleven, wisely, put that story on the backburner after the pilot episode, which effectively left audiences — already armed with the knowledge that the adorable found-family duo is no longer side-by-side in the future timeline — waiting for this very moment, the moment where they find out when and how it all went wrong.

Thematically, narratively, aesthetically — it’s beautiful in every which way.

Rarely do movies/TV episodes move me the way in which this one did. pic.twitter.com/dcVHov3j3E

Instead, though, of simply telling a story of loss, “Goodbye My Damaged Home” makes sure to highlight what Kirsten and Jeevan found in each other by detailing the lengths they each went, in their own respective ways, to help each other survive, to carry on in the face of the unknown.

“Goodbye My Damaged Home” also eschews traditional storytelling structures, as the episode is told from the perspective of present-day Kirstin — knocked unconscious from being poisoned in the previous episode — as a third-party, out-of-body observer of the 20-years-prior events that set her life on the current path that she’s on. Kirsten not only reckons with her own choices at the moment but is also given further insight into the decisions made by Jeevan and Frank, who — in the middle of losing their own lives — put hers ahead of theirs.

“This strange and awful time was the happiest of my life,” says Frank.

Despite being a story of downfall, “Goodbye My Damaged Home” flourishes in the moment of lightness, imbuing heartfelt gallows humor throughout. These are people who know that the world is ending and yet still find ways to revel in moments of humanity, moments of laughter and joy, amidst the wreckage. Painfully, though, that thirst for finding hope in the hopeless is ultimately what leads to the episode’s climactic moment, forcing the audience to ponder the cost of holding onto beauty in a world that no longer has room, time, or space for it. Is holding on to what you were worth the price of losing who you could’ve become?