Memes Pour In After Stephen A. Smith Claims He Was Approached To Run For Senate 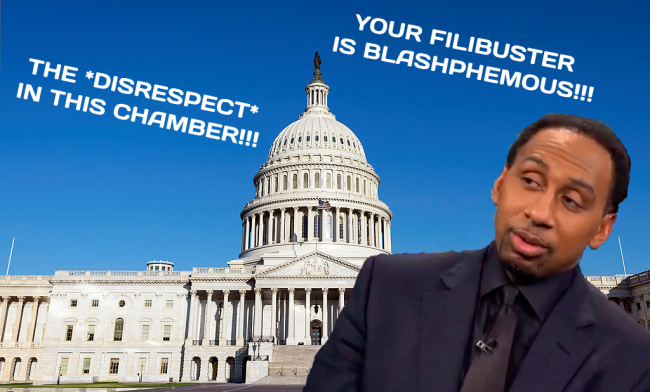 Stephen A. Smith has forged a career that has made his voice one of the most powerful in the world of sports media. His voice has become so widely heard, in fact, that Smith claims former Pennsylvania Governor Ed Rendell once approached the 54-year-old about running for Senate. Smith first began to gain notoriety in the sports media world as a writer for The Philadelphia Inquirer..

Stephen A. Smith says he was once approached about running for the United States Senate

“One time I was approached by Governor Ed Rendell in Pennsylvania: he wanted me to run for Senate. He said ‘You should do it!’ I said, ‘You know, I’m not a liberal. I’m not a conservative either.’ He said, ‘Don’t matter with you — you’re a voice that needs to be heard.’ He told me this about 10 years ago,” Smith said on J.J. Reddick’s podcast.

ESPN's Stephen A. Smith says he was once approached by former Pennsylvania Governor Ed Rendell to run for Senate. pic.twitter.com/EBmKYi0uPO

Naturally, given Smith’s famed outlandishness, Twitter was absolutely loving the idea of Stephen A. Smith taking his argumentative talents to the Senate floor.

Sports world reacts to Stephen A. Smith claiming he was approached about running for Senate

*Stephen A reading a bill coming through the Senate*

I AM SHOCKED. I AM APPALLED. WHO IN GOOD LORD’S NAME THOUGHT THIS BILL WOULD PASS BECAUSE I’LL TELL YOU SOMETHIN IT SURELY WILL NOT!!

the scariest part is that Stephen A wouldn't be the batshit craziest senate candidate this cycle, or even in the top 3… https://t.co/B8iWrfrPop pic.twitter.com/648AxXtaoc

Stephen A is BUILT for filibusters lmfao dude would be talking on the senate floor for 36 hours straight about Ben Simmons work ethic 💀 https://t.co/YVyMKYg9mK

I am convulsing with laughter thinking about Stephen A on Capitol Hill. We put trump in the WH, why not SAS in Senate https://t.co/psiUNfzS0W

Stephen A on the Sunday News shows and the floor of the Senate would be popcorn viewing https://t.co/T2mKY7A0KK

me in the multiverse of madness https://t.co/2q3R0WUgzY

Given the state of some of our country’s congressman and senators, the unfortunate part is that Stephen A. Smith wouldn’t even *remotely* be the most outlandish person on Capitol Hill — not even close.

RELATED: Kevin Durant, Stephen A. Smith, Shannon Sharpe, And Skip Bayless Are Beefing On Twitter After KD Said The Trio ‘Changed Basketball For The Worse’