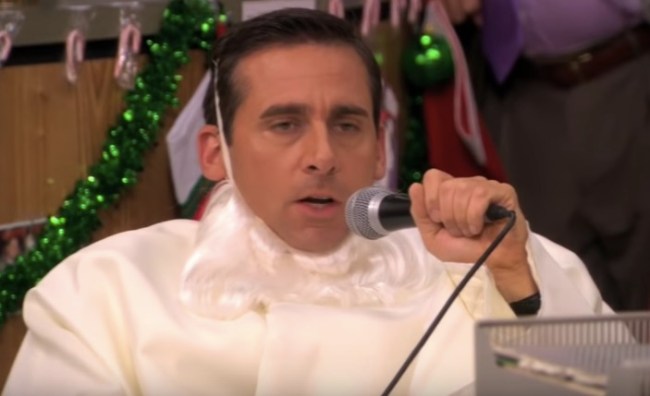 Steve Carell WAS The Office. Ricky Gervais might’ve played the character first in the UK version but NBC’s The Office has created a cult following of absolutely obsessed fans and it’s mostly thanks to Carell’s take on Michael Scott.

Without having any concept of the actual streaming numbers I’d wager that NBC’s The Office is one of the most popular comedies streamed on Netflix that isn’t produced and owned by Netflix. The show has such a rabid following and even though it’s been off the air since 2013 fans have clamored for a reunion.

To be fair, a reunion could make sense. There was a Christmas reunion for the UK version that wasn’t a full reboot of the show but a one-off revival to appease the fans. This could be done in the USA, as could a full-blown revival of the show, but not without the talent.

NBC would be INSANE to try and bring back The Office without the core cast members and while John Krasinski is on board with a reunion, Steve Carell’s recent comments in an interview with Time sort of squash any hopes of seeing him reprise his role as Michael Scott.

Here’s what Steve Carell had to say during a recent press junket for his forthcoming film Beautiful Boy when he was asked about a possible revival of The Office.

“I’ve never thought of it as a good idea,” he told TIME about the prospect of bringing back the NBC sitcom. “I think it existed in that time and with those people and it felt right. There was something so special about it, and I guess it’s an odd way to put it, but I love it too much to ever want to do it again. It’s too special to me in my heart in that period of time.”

Carell says that he knew The Office had the potential to be groundbreaking as soon as he started filming the show’s first episode with the rest of the cast.

“I remember it was the first week we were shooting the pilot, and Jenna [Fischer] and John [Krasinski] and Rainn [Wilson] and I went out to lunch…just the four of us,” he said. “We were sitting in this little diner in Culver City, and I remember saying, “Guys, if this works, this could be the most special thing that any of us are ever involved with.’” (via TIME)

Again, John Krasinski (Jim) is totally on board. I’m sure a bunch of the other actors are as well. NBC executives are even open to the idea of bringing back The Office. But do you really want to bring the show back without Steve Carell as Michael Scott? Hell no, you don’t.

That would be like bringing back 30 Rock without Tina Fey, Alec Baldwin, or Tracy Morgan. Or doing Seinfeld without one of the four main characters. You just can’t do the reboot without Steve Carell, and if he’s not into it then the rumors of bringing it back need to die out forever.

Don’t get me wrong, Jim’s the man. I love this clip:

Still, you need Steve Carell as Michael Scott to make a revival of The Office truly work.