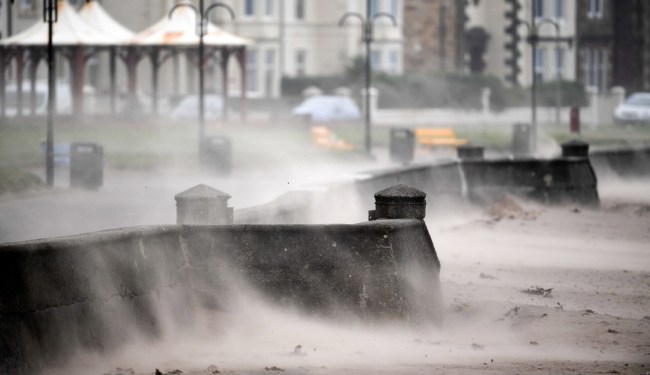 Storm Ali has been pummelling the United Kingdom with its intensely high winds causing a reported 186,000-plus homes, businesses and farms to be without power.

It is mostly due to the many fallen trees that have been knocking down power lines.

Two cars are buried under this massive tree in Battlefield in Glasgow @STVNews #StormAli pic.twitter.com/0zEypAWtjE

.@BBCWthrWatchers user Stewart took this picture of a car badly damaged by #stormali in Cambusbarron, near Stirling. He reports nobody was injured by the tree pic.twitter.com/jbJ35pO7J6

In addition to electricity, cell phone service, ferries, bridges, and flights have all been disrupted due to the bad weather which has seen wind gusts reach a speed of over 90 mph.

And as the video from Dublin Airport below shows, Storm Ali has been causing some very frightening attempts at plane landings.

What are the chances that the people on that flight ever fly again? Heck, I don’t want to fly ever again after just watching that plane land.

Then again, they could have been aboard this cruise ship that came loose from its berth and was getting blown around on the water.

The winds have also caused several accidents involving high-profle vehicles like semis and caused extensive damage to buildings and property.

We are currently dealing with a HGV which has overturned due to the wind on the M6 northbound between junction 43 and 44. The road may be closed for sometime. Please only drive in these conditions if absolutely necessary. #stormali #💨💨💨 pic.twitter.com/Yk7mQ2LjZI

#stormali rips off a section of roof from a house in Newcastle upon Tyne pic.twitter.com/9YYqMCbfN7

Some of the chaos caused by Storm Ali in Dublin today. Via Christopher Nannery #StormAli pic.twitter.com/OytkBI5CZM

Okay, not really, but this did. Seriously…

What is *wrong* with these people?! A leaf-blower in action during #StormAli in Glasgow. New level of madness right there. pic.twitter.com/mXwcDPe0WX

Pretty sure that lawn is either going to be spotless or covered in more debris than a leaf blower can handle by the time Storm Ali gets done with her fury.

What is *wrong* with these people?! A leaf-blower in action during #StormAli in Glasgow. New level of madness right there. pic.twitter.com/mXwcDPe0WX

Stay safe out there, Brits.