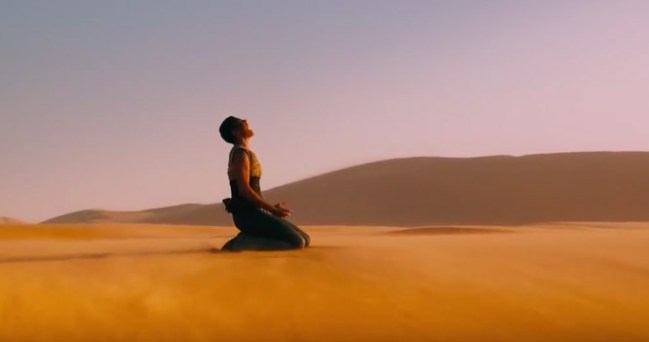 The scene, which takes place after about an hour-and-a-half of non-stop post-apocalyptic mayhem, brings the whole story together when Furiosa realizes that the home she was stolen from, the “Green Place of the Many Mothers,” no longer exists.

Now, Mad Max: Fury Road director George Miller, revealed to Entertainment Weekly how luck and Charlize Theron‘s tremendous acting skill made that scene truly stand out among the carnage and craziness of the film.

But first, some background…

Miller did not write a script for Fury Road, but rather storyboarded the action from start to finish. For this scene, however, his plan was sketchy — he only knew he wanted Furisoa to take a moment for herself, and that he would shoot her reaction from a distance. Yet on the day of shooting, the African desert wind had become so strong it threatened to ruin any take.

After assessing the wind blowing sand across the dunes, Miller thought,”She could walk across the bridge of the dune and into the sun and just respond however she would, having now have completely lost all hope.”

The team had very little time to get the shot. Miller’s only suggestion was for Theron to remove her prosthetic mechanical arm to become more vulnerable. After a single false start of a just few steps, Theron staggered out onto the dune like a wounded animal, dropped to her knees and screamed into the sunset amid the blasting sand. In just one take, Miller got it; a moment that not only capped his film’s second act, but became the surprise hit’s most epic shot.

“I’m pretty sure it was one take,” Miller said. “I learned this with Jack Nicholson, a very wise man, that actors are like elite athletes — they have to nail the performance right there in the moment regardless of what’s happening. Great performance artists have all the skills of an athlete but also need those emotional human skills they have to convey. I knew in an action film like this Charlize had all those attributes … Charlize is very precise; having been a very fine ballet dancer she understands space and how to move in space, and it was basically us watching her do it. I thank the movie gods all the elements were in place. We were lucky to get the wind, but there wasn’t any luck in getting the performance.”

I don’t know about you, but that totally makes me want to go watch the movie again right now.

Here’s an extended look at the scene…