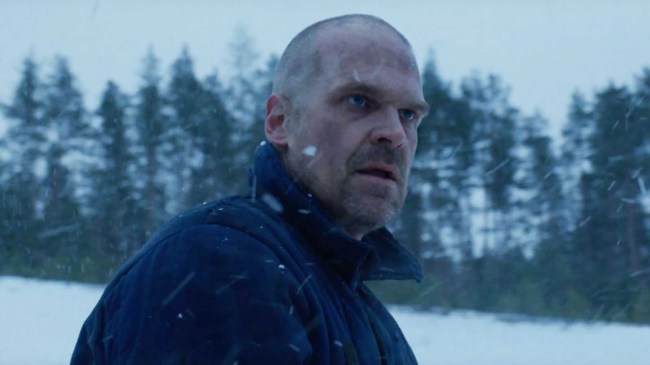 Before the existence of Tiger King, there was no question that Stranger Things was Netflix’s biggest success story.

Originally released in 2016 to virtually little fan-fare, the nostalgia-soaked 80s sci-fi throwback has since become a massive pop-cultural phenomenon, as its not only Netflix’s biggest all-time show, but it’s also become one of the biggest series on television, period.

Prior to our current global situation, Stranger Things 4 was in the midst of production before being forced to shut down on March 13. With Stranger Things 3 hitting Netflix in July of 2019, there was hope amongst fans that Stranger Things 4 would be released by the end of the year. However, as things currently stand, that seems increasinly unlikely.

Still, though, despite the premature production shutdown, the series’ cast and crew were still far enough into the process of filming that they had an idea of what season four is going to look like. Just earlier this week, Joe Keery teased that Stranger Things 4 is the scariest season yet.

Additionally, series star David Harbour — who you can catch in Netflix’s Extraction — recently teased the upcoming set of episodes, hinting that ST4 will include a “huge” reveal about Chief Jim Hopper’s backstory.

Eleven discovers “five boxes, one of which has Brenner’s stuff from Hawkins Lab, one of which says ‘Dad,’ and one of which says ‘Vietnam,’ and one says ‘New York,'” Harbour said during a recent appearance at Liverpool Comic-Con. “So there are these three things that we’ve established in the season that if we don’t pay off, it means that they’re bad writers. And the Duffer brothers are very good writers. So I know specifically that in Season 4 we will give you a big, huge reveal about Hopper’s backstory.”

Fans have “sort of sensed that in certain ways, but we haven’t really told you about [it],” Harbour added, pointing to past revelations that Hopper lost young daughter Sara (Elle Graham) to cancer and that he was a decorated veteran of the Vietnam War.

“I’m so excited about revealing this aspect of the character,” Harbour said. “It’s one of the things that I’ve known since the first frame of the first shot, and we haven’t expressed it yet. And finally we’re gonna express it in a big way. It’s my favorite thing about him that you guys don’t know about him yet, but it has to do with these backstories of New York, Vietnam, and dad. And I’m really excited for you guys to know more about that, and it relates, of course, to things he’s doing with Eleven and Joyce and things like that.”

“It’s a big reveal, and I’m really excited for you to see it. So whenever it comes out in 2050, when the next season comes out, you’ll get to see that.” [via ComicBook]

At this time, Netflix has yet to make any official announcement regarding their most popular series, however, it seems unlikely that the series will be able to stay on track for a 2020 release date.

RELATED: ‘Stranger Things’ Star Says Season 4 Is The Scariest One Yet