The Title Of ‘Stranger Things’ Season 4’s First Episode Has A Serious X-Men Vibe, And People Already Have Theories 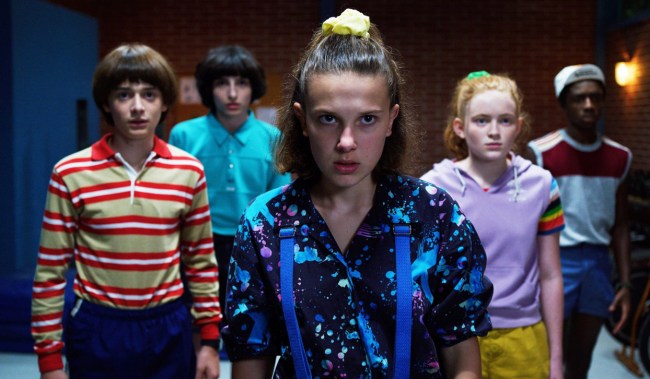 We may have to wait until 2021 for season four to drop and get our next fix of Stranger Things on Netflix, and apparently the plan is to torture fans with drips and drabs of little details for the next couple of years.

Both Netflix UK & Ireland and the Stranger Things writers’ Twitter accounts posted a photo showing the title of the first episode of Stranger Things season 4 being “Chapter One: The Hellfire Club” and there are already many fan theories about the episode’s X-Men themed title. (This little bit of information is conspicuously absent, as of this writing, from the main Netflix Twitter account for some reason.)

the first episode title of Stranger Things 4 is… 🥁 pic.twitter.com/jUgMKFalhd

In the world of fiction, the name Hellfire Club comes straight out of the X-Men comics. In the comics, the villainous Hellfire Club is best known for its attempt to turn the X-Men’s Jean Grey in The Dark Phoenix Saga.

On film, the club has been seen or alluded to in the movies X2: X-Men United, X-Men: The Last Stand, X-Men: First Class and (barely) Dark Phoenix.

The mere mention of The Hellfire Club has triggered numerous comparisons between Eleven and Jean Grey, both of which possess incredible powers of telekinesis.

Even before this title reveal, there has been no shortage of fan theories about season 4 of Stranger Things, including one fascinating hypothesis that Eleven, much like Jean Grey, is turned and uses her powers for evil against her former allies.

For what it’s worth, Millie Bobby Brown recently told Elle magazine that she’d be down for such a thing to happen.

“I kind of like it! I’m into it,” said Brown. “I wasn’t playing it like that. We don’t know what happens in season 4. I definitely don’t. In scenes after the Mind Flayer grabbed me, I wasn’t playing it as I was infected. I was definitely playing it as normal as possible. And maybe that’s the reason they didn’t tell me. To make it as real as possible. I don’t know. Those theories freak me out a bit. Because I’m like, “Oh god, that could genuinely be true.” And what if she is the villain? That would be so cool. Wouldn’t that be cool? I’d love to be the villain, but then I also wouldn’t because Eleven is perfect. It would suck.”

Naturally, thanks to these tweets, a handful of new Stranger Things fan theories have also now been spawned about what is going to happen in season 4.

billy hargrove and his clones: the hellfire club

So what does it really mean? We’ll have to wait (and wait, and wait) to find out. In the meantime, please enjoy these blooper reels Netflix also just released on the internet because that’s almost as good as getting another season in less than two years, right?