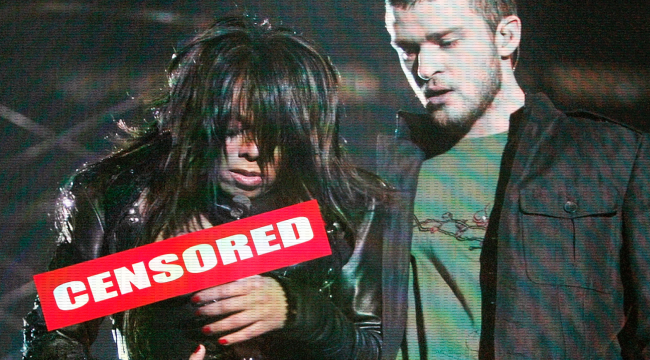 According to stylist Wayne Scot Lukas, who help Janet Jackson prepare for the infamous 2004 Super Bowl halftime show with Justin Timberlake, it was Timberlake who set it all up in an effort to one-up his ex-girlfriend Britney Spears.

During the 2003 MTV Video Music Awards, an appearance by Spears, Madonna and Christina Aguilera caused a commotion when the three singers locked lips. Coincidentally, the camera immediately panned to Timberlake in the audience when the mini-makeout sesh took place on stage.

Scot Lukas, who is working on a tell-all book tentatively titled Wardrobe Malfunctions: Receipts from the Front Lines and the Front Row, shared what he says really happened behind the scenes in the leadup to Jackson’s Super Bowl slip with Page Six.

Scot Lukas told us that the original concept was for Jackson to be in a pearl G-string inspired by one that Kim Cattrall had worn in an episode of “Sex and the City.”

“Janet was going to be in a Rocha dress, and [Justin] was going to step on the back of her dress to reveal her butt in this pearl G-string,” he told us. But “the outfit changed a couple of days before, and you saw the magic.”

Of course, in the end Timberlake tore off part of her top at the end of their performance, briefly revealing Jackson’s breast. Timberlake famously labeled the incident a “wardrobe malfunction.”

“I wouldn’t call it a wardrobe ‘malfunction’ in a million years. It was the most functioning wardrobe in history. As a stylist, it did what it was intended to do,” he said.

Scot Lukas added that “Janet has already forgiven Justin in private. They made their peace a long time ago.”

Earlier this year, Timberlake issued a public apology to both Spears and Jackson for his past actions.

Timberlake had previously sort of apologized over a decade ago.

Based on social media reactions it looks like he may have to do it again one more time.