The Cargo Ship In The Suez Canal Is Unstuck And It Cost The World A Fortune, Now What’s Next? 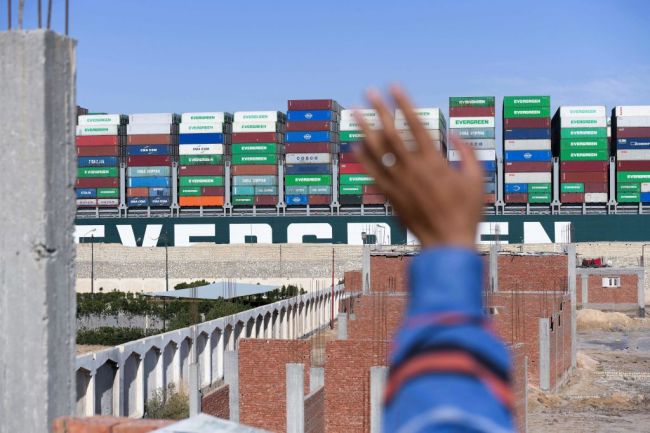 Our nearly week-long global nightmare is over and the Ever Given cargo ship that was blocking the Suez Canal is no longer grounded. This is great news, but the entire situation could have been avoided with a few nuclear bombs in the 1960s.

After six days stuck in the #SuezCanal, the Ever Given is headed home! 🚢pic.twitter.com/F0uPH10xRP

After the vessel was partially refloated on early Monday morning, salvage teams were able to wrench the bulbous bow from the sandy bank and pull the fully laden 220,000-ton ship completely free in the water, parallel with the canal. More than 20,000 tons of sand and mud were removed during the dredging operation and an extra-high spring tide also contributed to the successful attempt.

“We pulled it off!” said Peter Berdowski, CEO of Boskalis, one of the salvage firms hired to extract the Ever Given. “I am excited to announce that our team of experts, working in close collaboration with the Suez Canal Authority, successfully refloated the Ever Given … thereby making free passage through the Suez Canal possible again.”

Those who were involved in the dredging process were jacked, and rightfully so.

From there, a flotilla of tugboats assisted in pulling the Ever Given toward the Great Bitter Lake, a wide stretch of water halfway between the north and south end of the Suez Canal. When it arrives, the mega-ship will be unloaded and undergo a technical inspection.

🌇 #مشاريع_مصر🇪🇬|
The video was taken minutes ago for the EVER GIVEN ship in the Suez Canal, the ship did not return to its previous position as mentioned in some news agencies.#Egypt #Suez #SuezCanal #EVERGIVEN #Evergreen #قناة_السويس #السفينة_الجائحة pic.twitter.com/cdvXckRrVH

BREAKING: the ship is really moving now and horns are blaring in what sounds like celebration.

The stern has swung away from us and it looks like it’s really facing the right way now after hours of being jackknifed across the channel. pic.twitter.com/gTuvqWO5ta

While the first part of the crisis is solved, there are significant ramifications on the Global Supply Chain. Approximately 12% of global trade passes through the Suez Canal, and an estimated $9 billion worth of goods pass through the 120-mile waterway each day. The Ever Given was stuck for 147 hours and 38 minutes, so at about $400 million in trade per hour, the blockage cost the world in the ballpark of $59.5 billion over the course of six days.

More than 350 vessels, carrying anything from cattle to crude oil, have piled up on either end of the canal, waiting to pass. That includes container ships, oiler tankers and bulk carriers. Other ships have opted for the alternate route around the Horn of Africa— a 3,1000-mile detour that adds about two weeks to voyages and runs those ships hundreds of thousands of dollars in fuel and day-to-day operating costs.

"Back then they didn't want me, now I'm hot they all on me" — Cape Of Good Hope pic.twitter.com/ET9ODLP345

Trade through the canal has been authorized to begin immediately, but it will take weeks for things to return to normal, as containers won’t arrive in ports when originally expected. Domino effects for the world’s importers, exporters and manufacturers will be felt for up to three months. Meanwhile, ports that are already strained from COVID-19 issues will become even more congested with the canal’s reopening. A sudden traffic flow through the Suez Canal could cause ships that are behind schedule to skip over smaller ports and head to bigger ones in hopes of making up for lost time.

This comes on top of another significant issue, which could lead to a toilet paper shortage similar to the one seen at the beginning of the COVID-19 global pandemic. There is a high demand for shipping containers across the globe, and Suzano SA — the world’s largest producer of wood pulp, which is needed to make toilet paper — is feeling the ramifications. Suzano has already had to push back March shipments to April, keeping toilet paper producers low on the pulp they need. With the six day stoppage and delayed trade that was caused by the Suez blockage, container availability will be even more limited.

While there is still a lot that hangs in the balance, the hard part is over. The Ever Given is free and trade can resume. Unfortunately, that also means the end of a storyline that has captivated the world and resulted in some pretty stellar memes. It has been a good run, but it’s best for the Global Supply Chain that the Suez Canal returns to normal, which out-weighs the content. Float free, Ever Given, float free.