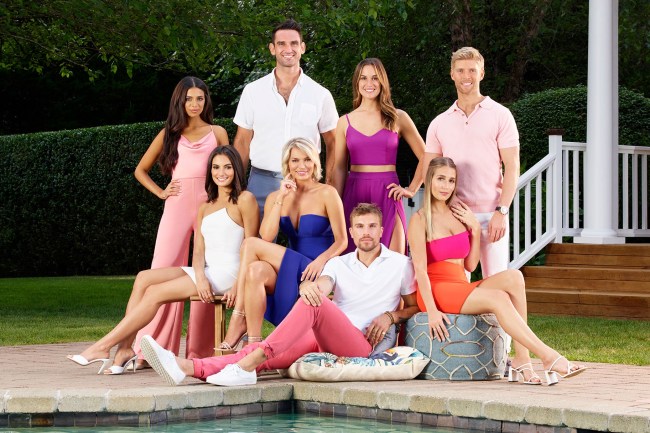 -Are Luke’s feelings for Hannah genuine? Or is he just the ultimate fucboi?

-Is Crazy Carl going to make it happen with Barry’s instructor Sarah, or is she running up hills to get away?

-Will Amanda leave her job to join Kyle at Loverboy full-time?

Hand up, I missed episode 8. But the “previously, on Summer House” briefing brought me up to speed. Looks like Luke is dating some other chick named Jelena and Hannah isn’t having it? Wow. Wish I’d seen the episode. If only I had the time to go back and watch it…

We open on the crew in New York. Carl and Luke head to a prison yard to play basketball. The rims have neither nets nor hope. Stephon Marbury once got a head tattoo here. Luke, hockey player, is terrible. Carl isn’t bad. They play H.O.R.S.E. and it’s all the whimsical through-the-legs layups and tomfoolery I used to employ as a young boy. Carl, clearly, grew up in a house with a driveway.

Apparently Carl and the Barry’s instructor Sarah are back on? Unreal. I thought she cancelled him on that first date. This guy has more lives than a cat! In a rare show of intelligence, Carl has invited Sarah to the house this weekend for Kyle’s 37th birthday bash—the one weekend that Lindsay is away at a friend’s bachelorette party in Tulum. Tulum in the summer? Couldn’t have picked a worse time. Might as well go hiking in Death Valley.

Meanwhile, Hannah is getting played by Luke. Paige sees it. We all see it. But Hannah says it’s about competition, and she wants to bury Jelena’s boneless carcass in the ceiling insulation. It’s amazing to watch this. Luke spent 8 episodes desperately pursuing Hannah. She finally gave in to his charms, and he immediately cooled off. For love of the chase!

The ladies pull up to the house and wade through a sea of packages on the stoop. Among them, Bongzilla—a beer bong with enough hoses to allow entire Irish Catholic families to partake simultaneously. Apparently, Kyle has chosen “college frat party” as the theme for his birthday. What an improbable stretch, so far outside his comfort zone. At 37, he wants to relive the glory days of ramming zucchinis up the assholes of pledges. I guess hazing isn’t illegal if it’s all voluntary.

Somehow, Jordan is coming back again this weekend. Even though Jules and he are on rocky ground. He’s been texting out of both corners of his mouth, telling Hannah and Paige one thing and Jules another. Swinging from both sides of the plate, so to speak. Look, Jordan’s gay. And that’s great. But Jules, if you’re wondering why he’s not interested in you, it’s because you’re not a dude.

Carl and Kyle arrive wearing Loverboy shirts and shorts. They look like the male version of those RedBull girls that drive around in those ridiculous cars. Kyle is disappointed that the house doesn’t look more like a frat, and says “we’re taking it back to 2001, when hazing was still completely legal,” making me regret that I wrote effectively the same joke two paragraphs ago.

But the drama between Jordan and Jules threatens to rain on Kyle’s parade. An emergency house meeting is called in Paige’s room, featuring Luke, Hannah, Kyle, Amanda, Paige, and Carl. It’s the A-team, which means serious business is afoot. Are we about to see someone voted off? Kyle says that neither Jordan nor Jules have the power to oust one another. But he’s a bit loud, as he’s been double-fisting in a smoking jacket for at least an hour.

“I know, I would have been a horrible librarian,” he quips.

Hysterical. Credit where credit is due: it’s a genuinely funny joke. I laughed out loud. Most of the humor on this show derives from the insanity of it, but Kyle has his moments. Hat tip, Kyle.

Carl suggests they kick them both out (meaning Jules and Jordan). The girls don’t love that idea but I’m all for it—let the fucking heads roll. People are getting way too comfortable with their situation. Staying at the Summer House isn’t a right; it’s a privilege. You have to earn it, and right now Jordan and Jules are acting like dweebs. Sure, their behavior is wildly similar to the fights we’ve seen from Carl and Lindsay this season, but those two are OG; Jules and Jordan are new G.

Half the house heads out for the night and returns, presumably drunk. Hannah and Luke head for the hot tub. In the water, he tells her he wants to take her up to his room and have sex with her, but that he needs a week to sort things out. Pardon me? What was that? Sex isn’t switching jobs. You don’t give notice. This guy knows all the games, man, and poor Hannah has gone from chasee to chaser.

The next morning, everyone preps for the big Kyle frat party. Carl calls Sarah to check in, but she edges out of coming with some bullshit about teaching classes in the morning. Carl, disappointed, tells us that she clearly knew long before that she wasn’t coming. The bull is stirring. This could get interesting.

Sure enough, in the next scene, we see Carl hitting the ol’ fireball bottle. Might as well, Carl. Just as Popeye needs his spinach, Crazy Carl needs his fireball. And with that, we’re off to the races. Carl starts to yell at Jordan for not helping with the setup.

To Kyle’s credit, the party looks insane. He’s got an inflatable slide the size of a pyramid; bongzilla is up and attracting plenty of latchers; and out of nowhere, a menagerie of livestock arrives. Goats, miniature ponies, sheep, and whatever else they grill in far away lands are brought out on leashes to graze among the shitfaced partygoers.

Jules wanders around without a purpose, wondering where everyone is, trying to find a reason for why the cameramen should continue to feature her. I gave her a chance, I really did. But she’s back to being the most boring person on the show by a country mile. The only thing she ever says is “where is everyone?” Jules, if you’re at a party with over 100 people and you can’t find anyone, you might be the problem.

A bunch of Carl’s big boy friends arrive with names like “Shep.” At first I thought that was short for shepherd and that he was the handler of the sheep, but he wants nothing to do with the animals. Then I did a little digging and it turns out this dude has his own show on Bravo called Southern Charm. Guess I’ll have to start that too.

At one point, Amanda pushes a solo cup up Kyle’s toga because he has to pee. Pretty wild. Makes me think they’re going to make it.

And then, the best thing ever happens. Jules approaches CRAZY CARL, who we can probably assume is absolutely shittanked, for advice on why people don’t like her. Carl, hero that he is, tells her she and Jordan are torpedoing the summer. Torpedoing the summer! What a great way to put it. Jules thought she was seeking counsel from a trusty confidant. Instead, she walked straight into a fucking hornet’s nest. Carl I love ya! Straight shooter till the day he die! Then Carl tells her he doesn’t want her in the house anymore, and Jordan comes up to listen. Carl then adds that he doesn’t want Jordan there either, without even realizing that Jordan is standing two feet away. It’s just incredible, ballsy honesty. Say what you want about Carl, the dude is honest.

And that’s the episode. Wowza. Things are moving. See you next week for more of the most exciting show on television!

PS- a friend of mine mentioned that this may be the last season of Summer House for a while, given that they probably won’t be able to shoot it this summer given the pandemic. Obviously a sad reality to face, but let’s just make sure we enjoy these episodes as much as we can. We’ll find a way through, friends.