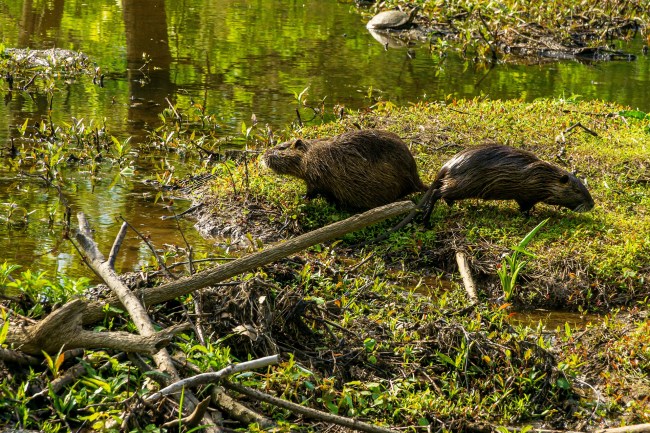 I’ll be honest, I definitely did not have ‘Swamp Rat Invasion’ on my 2020 Disaster B.I.N.G.O. card because that’s not a set of words I’ve ever heard strung together in that order before but here we are. 2020 marches on and things continue to get weirder.

So a ‘swarm of swamp rats’ with orange teeth, huge flat tails, and webbed feet overtook Krauss Baker Park in Fort Worth. Frankly, I’m most shocked by my ability to still be shocked by the news.

Swamp Rats, better known as Nutria, are pretty common to states like Louisiana but I don’t really associate them with Texas despite them being found all throughout Southeast Texas. I’ve only ever lived in Dallas and spent time in Austin and didn’t see them in either city but maybe I just wasn’t looking hard enough in Dallas. They’re big enough to startle anyone who comes across one but when seen in a large group overtaking public space they’ll certainly strike some fear in any passerby.

I guess the swarm of swamp rats overtook the park because locals have been feeding them and these vermin have come to expect an easy meal, that’s what TPWD Urban Wildlife Biologist Rachel Richter told local news KSAT.com.

“The reason for the thriving population of nutria in Krauss Baker Park is that people are feeding them at this location. People generally mean well when they offer food to animals, but they don’t realize that they’re doing far more harm than good. Feeding wildlife is a huge problem that has negative impacts on our local ecosystems and often leads to human-wildlife conflict in our communities,” Richter said.

When I first saw the picture of the swarm of swamp rats and the ducks I legitimately thought it was a massacre at first where the ducks had decimated them. Ducks are sometimes deployed to destroy swarms of locusts. But my eyes were confused and I was just seeing the red food in the YouTube video below:

The major take away here is DO NOT feed the swamp rats wherever you are. They’ll tell their swamp rat friends and before you know it there will be a colony of swamp rats and they’ll think they own the damn place. So just leave the duck food and swamp rat food at home for the good of the people.