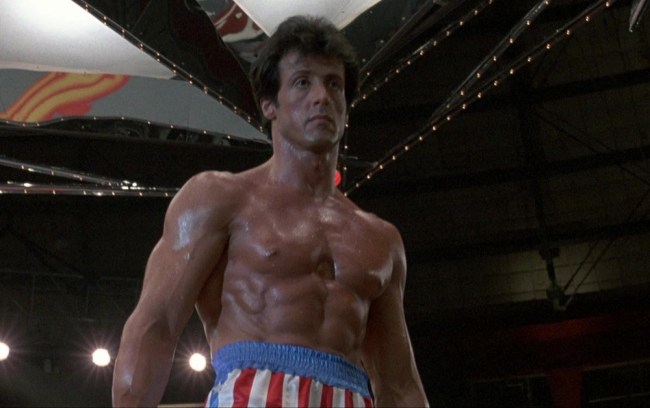 Despite hinting last year that he was hanging up the boxing gloves as Rocky Balboa and despite saying last week that he has “zero ownership” of the Rocky franchise, Sylvester Stallone confirmed that he is working on Rocky VII. As an added bonus, Stallone also said a Rocky prequel TV show is in the works. That escalated quickly.

Stallone, who turned 73-years-old this month, gave an interview to Variety. Of the many topics discussed in the interview, Stallone confirmed that two major Rocky projects are in development and it is not Creed III.

Stallone said that he is “working on a new Rocky movie.” The new Rocky film Rocky” is being produced by Winkler-Chartoff Productions, the production company that co-owns the Rocky franchise along with MGM. Irwin Winkler has been a producer on the original Rocky and all of the sequels as well as Rocky Balboa, Creed and Creed II.

When asked about the new Rocky movie, Irwin Winkler said, “We’re very high on it.” The producer added that negotiations have already started and they want Stallone to write and star in the film. “We’re very anxious to make it,” Winkler stated.

“I have a great idea for Rocky, Stallone said of the plot for the new film. “He finds this fella in the country illegally and it becomes a whole thing.”

“Rocky meets a young, angry person who got stuck in this country when he comes to see his sister,” Sly said. “He takes him into his life, and unbelievable adventures begin, and they wind up south of the border. It’s very, very timely.”

“It’s like the magician who lost his tricks,” Stallone adds. “You’ve seen everything, but what can be different? Throw him out of the country, he’s in another world.”

Stallone also revealed that a Rocky prequel is in development and will be a TV series, most likely for a streaming network. In May, Stallone said that he wants to reboot the 1986 cop flick Cobra as a TV show for a streaming platform.

If you can’t wait years to inject Rocky Balboa into your veins, you’re in luck. In August, Netflix will allow you to go on a Rocky marathon by adding Rocky, Rocky II, Rocky III, Rocky IV and Rocky V to their streaming library. But more importantly, when are we getting a sequel to Over the Top?