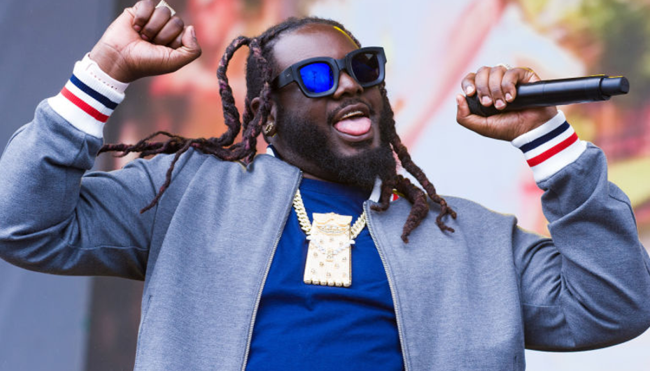 I’m willing to bet most people reading this are haunted by at least one incredibly awkward encounter you’ll never be able to erase from your memory no matter how hard you try. I’m talking about the kind of incidents that have a habit of randomly dominating your thoughts when you’re trying to drift off to sleep: the time you said “You too” after a server told you to enjoy your meal or got blocked after professing your love for a middle school crush on AIM.

However, I’m also willing to bet there aren’t many people on this planet who could even come close to topping the unadulterated cringiness of the truly mortifying encounter T-Pain recalled during a recent appearance on Drink Champs.

T-Pain is essentially the Guy Fieri of music: a misunderstood visionary who was forced to weather a hurricane of criticism after being thrust into the spotlight in the first decade of the millennium before embarking on a glorious redemption tour after the world realized he didn’t deserve a sliver of the crap that was chucked in his direction.

As you likely know, T-Pain was primarily responsible for transforming Auto-Tune from a musical crutch into the veritable instrument he deftly showcased on hits like “I’m N Luv (Wit a Stripper)” and “Buy U a Drank.” It was only natural that countless imitators harnessed the vocal modifier in an attempt to replicate his success, and as a result, he became the scapegoat when the trend turned into the plague that led to Jay-Z dropping “D.O.A. (Death Of Auto-Tune)” in 2009.

Earlier this year, T-Pain revealed he dealt with a lengthy bout of depression after Usher accused him of using Auto-Tune to ruin music, and while he was name-dropped on Hov’s track, Jay-Z made it clear the song was directed at the people who aped the singer’s signature style as opposed to the man who sparked the movement he was attempting to end.

During his Drink Champs episode, T-Pain revealed he was nonetheless less than thrilled with “D.O.A.” and came close to hopping in the booth to record a response. While that plan didn’t pan out, he did have multiple opportunities to defend his honor to Jay-Z’s face— which is exactly what he attempted to do when he ran into him and Beyoncé at a Grammys afterparty.

T-Pain recounted the encounter around the 22:15 mark in the above clip, and if you have a low tolerance for secondhand embarrassment, I would strongly urge you to gird yourself for what you’re about to read:

He knew I couldn’t shake his hand, so he hit me with the “It’s all good, bro.” *mimics Jay-Z rubbing him on his head*

On my head, bro! And then, I’m trying to comfort myself by giving an elbow tap to Bey. She hit the elbow and the f—kin’ Hennessy dropped on her white dress. I was like, ‘You know what? I’ma go find the closest gun…I’m just gonna go ahead and end it.’

I’d like to thank T-Pain for making me feel so much better about calling my third-grade teacher “Mom.”