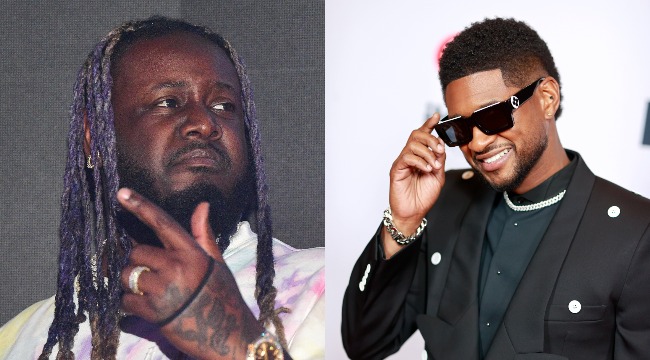 Vulnerability isn’t a recognized currency in the hip hop world. Fiscal irresponsibility, sex-having, and alpha posturing is likely to advance your career far more in the biz than revealing that you cried during Manchester By The Sea.

Two-time Grammy award winner T-Pain gifted the world with a rare moment of fragility when discussing a 2013 interaction he had with Usher on a flight to the BET Awards.

T-Pain popularized the use of Auto-Tune pitch correction, an audio processor used to measure and alter pitch in vocal and instrumental music recording and performances. Not only has T-Pain used the mechanism in many of his 50 chart-topping singles, other artists like Snoop Dogg (Sexual Eruption), Lil Wayne (Lollipop), and Kanye West (808s & Heartbreak) began following suit.

Usher, a “traditional” artist, is evidently a huge adversary of the music hack, and one comment he flung at T-Pain in 2013 sent the artist spiraling.

I hate how the world did T-Pain. pic.twitter.com/6Ib9dzHTjY

“We were going to the 2013 BET Awards. We were all in first class. I was awakened by the flight attendant. She said, ‘Usher would like to talk to you in the back.’

So I got up and went back, quick small talk. No big deal.

Then he was like, ‘I want to tell you something, man.’ He sounded real concerned.

He was like, ‘Man you kind of fucked up music.’

I didn’t understand. Usher was my friend. He was like, ‘You really fucked up music for real singers.’

Literally at that point, I couldn’t listen. Is he right? Did I fuck up music? And that is the very moment, I don’t even think I realized this for a very long time, that’s the very moment that started a four year depression for me.”

The clip above has been viewed more than 3 million times and suffice it to say, Usher hasn’t made any new friends today.

He use auto tune by choice. He can really sing though. pic.twitter.com/edZeZmrYf0

First of all, why Usher sending some flight attendant to 1. wake up T-Pain while he sleeping and 2. tell him to get up & go see that fool Usher in another section of the plane?? What kinda bush is that?!? pic.twitter.com/0OZ1wdAxI8

The same has been said about photo editing applications “ruining” photography. They are tools, they give some people a false sense of achievement, but the talent required to be a professional still comes from an understanding of the craft, whether it be photography or music.

Usher and the rest of them were just hating on T Pain because he could use it and sing the same way they didn't like Roger Troutman when he started this sound . pic.twitter.com/SEAAD5UTag

I'm disgusted. And it didn't take seeing T-Pain on The Masked Singer for me (and many others) to know he is talented as fuck, so I am not here for anybody upsetting T-Pain. pic.twitter.com/7vjlZwq9oj

Usher go back to dancing in the rain. T-Pain slander is strictly prohibited.