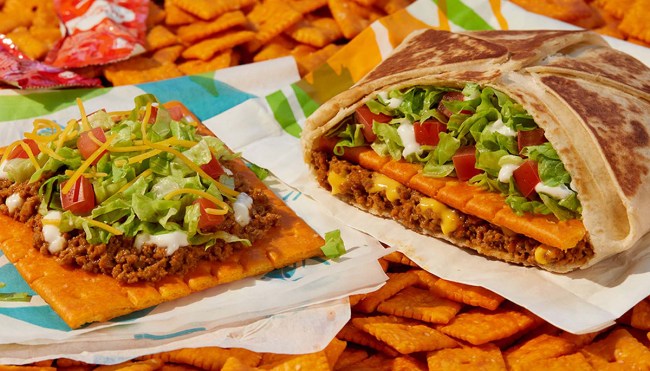 There are plenty of fast food restaurants that have managed to drum up publicity with the help of some particularly outlandish menu items, but there isn’t a single chain that has managed to perfect that particular art quite like Taco Bell.

Taco Bell has spent years harnessing the Jurassic Park approach to dreaming up new offerings thanks to the creative culinary minds in its test kitchen who are seemingly so preoccupied with figuring out whether or not they can do something that they never stop to ask if they should.

As a result, Taco Bell has treated us to a steady stream of innovations with a tendency to straddle the extremely thin line between “ingenious game-changer” and “ungodly monstrosity”; it’s pretty easy to understand why someone would apply either of those labels to a burrito filled with spicy Pop Rocks or a breakfast taco that features a fried egg as a shell.

Taco Bell’s most defining triumph in that particular realm is arguably the Doritos Locos Taco, the shining example of marketing synergy that took the world by storm when it was unleashed upon an unsuspecting world in 2012. The brand has released plenty of other novel items since then, but it arguably took a decade for a truly worthy successor to emerge in the form of the giant Cheez-It that serves as the centerpiece of two new options that have taken the internet by storm.

On Tuesday, Taco Bell announced it will be testing out the Big Cheez-It Tostada and the Cheez-It Crunchwrap Supreme, which both feature a massive version of the snack that’s “16 times the original size” of the beloved cheese cracker elevated by the addition of beef, cheese, lettuce, and a few other traditional accouterments.

If the primary goal was to drum up hype, Taco Bell certainly succeeded based on the flood of reactions the news generated after going viral.

Can we buy the big cheez-it separately https://t.co/OdnNqliTMM

The Plan: A massive Cheez-It, which is 16 times the standard size, serves as the base for Taco Bell's new "Big Cheez-It Tostada" https://t.co/xe8bVwswFd pic.twitter.com/PhyvdHP7TZ

it’d be so fun to work in the taco bell test kitchen. just getting ripped and saying things like “what about a huge cheez-it” https://t.co/QfNDKGawBc

taco bell is making things out of giant cheez-it crackers and in totally unrelated news is also moving all of its restaurants right next to dispensaries pic.twitter.com/fFRII481uw

Sorry but I'm only interested in a Cheez-It that's at least 17 times the standard size. Until then don't waste my time. https://t.co/ivJdkW61f1

The two items are currently being tested at a single location in Irvine, California, and it’s safe to assume a wider rollout will be contingent on the initial success at that restaurant.

Here’s to hoping the good people of Irvine and the surrounding area step up in the clutch.