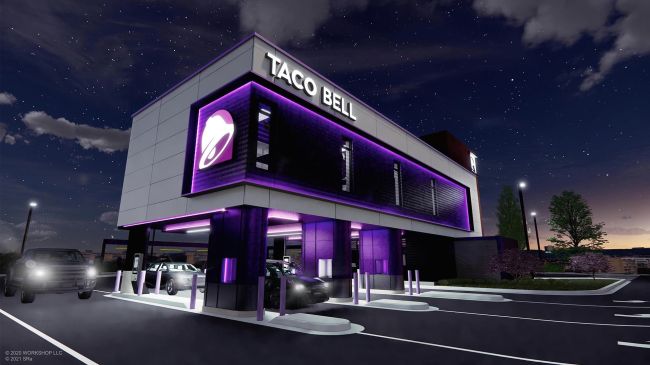 The pandemic has changed nearly every kind of business, especially restaurants. Taco Bell is preparing for the “new normal” or upcoming pandemics with a new concept restaurant.

It’s called the Taco Bell Defy restaurant, and it is focused on drive-thru and delivery. Starting in the summer of 2022, the first-of-its-kind Taco Bell concept restaurant will open up in Brooklyn Park, Minnesota. The new restaurant was the brainchild of Minnesota-based Border Foods (one of the largest, privately-held Taco Bell franchisees in the U.S.) and Minneapolis-based design company Vertical Works Inc., who tried to re-invent the drive-thru.

The futuristic two-story, 3,000 square foot location will boast four lanes, three of which are dedicated to mobile or delivery order pickups to provide quick, skip-the-line service for customers who order through the Taco Bell app and third-party delivery services. The kitchen is on the second floor, making the Taco Bell restaurant look like a bank.

Taco Bell Defy will also feature digital check-in screens for mobile order customers and a proprietary lift system for food delivery, which is perfect for contactless order pickups. The food is delivered in a mere six seconds.

“We took that idea, and lifted all the operations of the kitchen up off the ground, and made four or five lanes of traffic that go through it, and we serve walk ups, we serve people on bikes, and we serve lanes of people thru traffic,” said concept co-creator Josh Hanson.

“This new, innovative concept breaking ground in Brooklyn Park, Minnesota, will improve a major aspect of the consumer experience: drive-thru speed,” said President of Border Foods, Aaron Engler. “We’re partnering with Taco Bell and the best and brightest in technology and design to create what will very likely be the future of quick service restaurants.”

“We think that contactless, frictionless, experience is the wave of the future,” Engler said of the new restaurant, which is helpful during a pandemic.

“We believe in big ideas and know that some of our best work comes from moments when we push the boundaries,” said Michael Strommen, PD Instore’s CEO. “We’re excited by the opportunity Defy brings to the consumer. The design strategically blends technology and design to deliver the convenience of fast, craveable food without many of the challenges of traditional drive-thrus.”