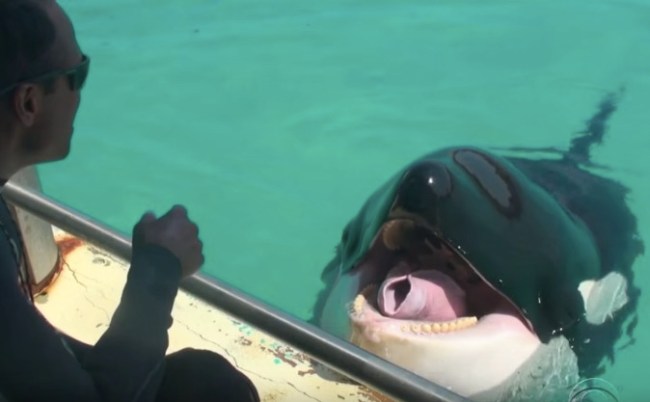 When you woke up this morning did you realize that you now live in a world where killer whales can talk? And I’m not referring to that ‘Free Willzyx’ episode of South Park where they ‘rescued’ a killer whale by getting Mexico’s space program to strap it to a rocket and shoot it to the moon after the kids were tricked into thinking the whale could talk. This isn’t a joke. The killer whale below has legitimately learned to mimic human speech and it can say ‘hello’.

We’ve known for decades that whales can speak to each other. Whale sounds are also colloquial and change slightly as they travel from pod to pod across the globe. So Australian whales legitimately have Australian accents and American whales have American accents. But until now we didn’t realize whales could mimic human speech:

As I watch this clip more and more I can’t help but think that whale’s inviting its trainer into the water for lunch. There’s something eery happening here. Perhaps it’s because that Killer Whale is most likely an alien from outer space who was sent here to learn our ways. That’s the only plausible explanation for why this whale can talk.

Let’s watch that again, shall we?

I’m still having trouble wrapping my mind around the fact that whales can mimic human speech. The possibilities here are endless.