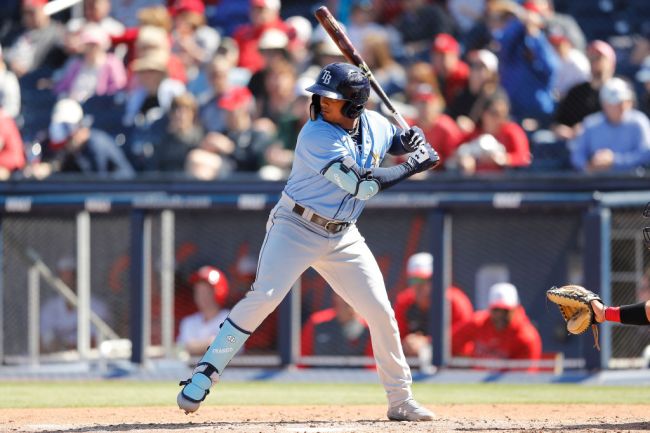 The future of the Tampa Bay Rays organization has arrived. Wander Franco is baseball’s top prospect for the second consecutive season and he is an absolute monster. The 20-year-old received the invitation to the team’s Spring Training camp for the second year in a row and wasted no time showing why he is No. 1.

Franco started as the team’s designated hitter on Tuesday and received the start at shortstop on Wednesday. After going hitless in his first five at-bats of the spring, Franco — a switch hitter — stepped up to the plate left-handed and unloaded on a ball that probably hasn’t landed yet.

Pirates right-hander Miguel Yajure left one hanging over the edge and Franco sent the first pitch he saw to the moon. He took a few steps out of the batter’s box, tossed his bat aside and then pointed toward his dugout as he rounded the bases. It wasn’t a crazy pimp job, but the younger generation of superstars are playing super loud and it’s so refreshing.

The piss missile appeared to land at least on the roof of the Rays’ office beyond right field, but it traveled so high and so far that it was difficult to track.

Not to say the ball Franco hit cleared the building behind the RF fence and boardwalk on a fly, but #Rays PR chief Dave Haller went up to look for the ball and it's not on the roof.

Expectations for Franco are sky-high— literally. He finished the 2019 season on the High-A level and spent 2020 at the Rays alternate site before being included among the team’s postseason player pool. Despite his inexperience on the major league level, the ninth-youngest player on the Top 100 prospect list is slated to be a big part of Tampa’s future. His path to a Major League roster is seemingly blocked right now, but it wouldn’t be a surprise to see the team make a few moves in order to bring him up to the Bigs as soon as this season.