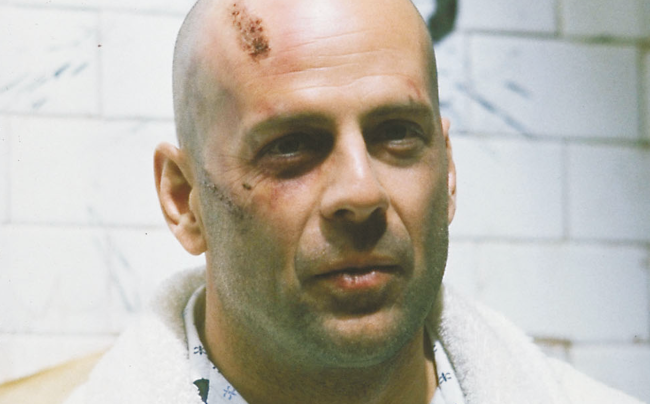 I kid you not, I just watched 12 Monkeys on Monday night with my roommates. Something I’d seen about a decade ago on a random Saturday afternoon on the couch with my Dad, it was my roommates’ first time seeing this aggressively weird, Bruce Willis and Brad Pitt-starring sci-fi thriller from the mid-90s.

Definitely a little slower than I remember, it’s also far creepier and flat out weirder than I remember, and the fact that everpresent weirdness is being perpetuated and reveled in by Willis and Pitt (who was actually nominated for an Academy Award for Best Supporting Actor for this role) is what makes the experience so uniquely enjoyable.

So, that was my main takeaway from watching 12 Monkeys — “man, what a wild fucking movie.” You know what wasn’t my main takeaway? Man, that Bruce Willis sure does have a real asshole-lookin’ mouth,  which was apparently a legitimate concern of director and Monty Python legend Terry Gilliam.

In celebration of the film’s 25th anniversary, Inverse published an oral history of the film in which Gilliam dropped an absolute heater of a quote wherein he compared Bruce Willis’ piehole to someone’s rectum.

“The pressure was to get a movie star in,” Gilliam said. “That was at a time when I was still a hot director, so people wanted to come near me and touch me. So they were coming up with all these names. And I just kept saying no. Tom Cruise, Nic Cage, they were all being thrown at me.”

“I had never been a great fan of Bruce’s before, but I liked talking to him, and I thought, ‘OK, this guy’s smart; he’s funny,’” the director said. “I explained to him my concerns about him as an actor. I hated the Trumpian mouth he does in films. Rectal. It’s like I’m looking at somebody’s asshole.” [via Inverse]

Great, now every time I watch a Bruce Willis movie, I’m going to be thinking about assholes. Thanks, Terry.