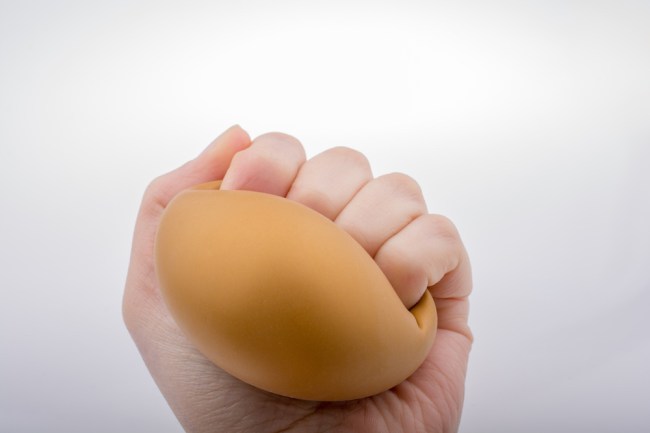 Okay, this is nuts.

I was scrolling through my Instagram feed yesterday afternoon, as I often do while trying to summon enough energy to get off the couch and crank out three or four pushups.

That’s when I spotted something that shook me to the core. No, it wasn’t another photo of Trump posing with a can of beans or anything like that. This was far worse.

It was a post suggesting that it was actually possible to die from squashed testicles. I couldn’t believe what I was reading. I mean, don’t get me wrong, I’ve never been under any sort of illusion about this equipment we’re packing around being indestructible.

I feel like it’s common knowledge that battering one’s balls is not exactly the healthiest thing a man can do. But it happens, and more times than we’d care to admit.

So, to see a paragraph implying that just a tad too much pressure on the baby makers could put a man in an early grave, well, I don’t mind admitting that scared the crap out of me. It had to be fake news. It just had to be. At least that’s what I wanted so desperately to believe. But after doing a little research, I quickly learned that it was indeed a distinct possibility to come face to face with Saint Peter after a savage nut crunch.

There are countless situations in which a dude could find his scrotum in a bind. They might get assaulted during a heated basketball game or become a last-ditch target in a fistfight.

“When all else fails, son, just go for the nuts,” said every father trying to teach his kid to throw down. I’m sure that there have even been guys who have endured a wringing of the ding-a-ling in the bedroom when shacked up with some feisty goddess who was just trying to show off. It’s also possible to flatten the brovaries by just plopping down on the toilet too damn fast. After all, the bag starts to sag a little more later in life, you know?

What I’m getting at here, fellas, is our balls are always at risk of being flicked, hit, gnawed on, and bashed. To the person sitting there right now thinking, “I can’t believe I’m actually reading this dumb crap,” get over it, pal. I’m out here doing the Lord’s work – trying to save some poor schlub from being carted off in a body bag because he took his family jewels for granted.

Or maybe I’m just trying to save myself. Either way, you’ll want to pay close attention to this one.

Although death by flattened, obliterated nads is not an everyday occurrence, dudes are still checking out because of it from time to time. Last year, a man was nut crushed to death by his wife because she was convinced his cheating ass had been possessed by the Devil.

A report from the Sun shows that she ripped his pants down around his ankles and bore down on the old Jackson Bollocks until he lost consciousness. He was later taken to the hospital where he was pronounced dead.

Other twisted accounts published over the years include a 17-year-old who was killed after having his testicles “yanked” by some kid in the schoolyard.

Another man was carted off to the great beyond when his balls were destroyed in a violent scuffle over a freaking parking space. I even found one horrific story about a guy from India whose nuts exploded after his pissed off daughter-in-law snatched them up with a vengeance. Exploded! As in, pop! It wasn’t because he was caught diddling someone or something that he shouldn’t have been, either.

He lost his life to a ruptured set of cojones because his rooster lost a cockfight.

It makes perfect sense to me that death can occur from a completely blown out nut. In fact, most of us wouldn’t want to survive it. I don’t think AAA has a roadside service to fix that sort of thing. However, the report suggests that this man actually died by bleeding out through a gaping hole in his sack. Whoa!

How death can occur from this injury is actually just as bizarre as it is interesting. Medical professionals say that mashed testicles can release an overdose of adrenaline to a man’s system and snuff him out by way of cardiac arrest or stroke. It’s nature’s way of putting us out of our misery.

“The testicles are exquisitely sensitive to touch and there is a huge release of adrenalin when there is excessive force applied to these organs,” Dr. Irwin Goldstein of San Diego Sexual Medicine at California’s Alvarado Hospital told TNT Magazine. “A heart attack could certainly result from severe testicular pain from squeezing.”

Dr. Deepak A. Kapoor, president of Advanced Urology Centers of New York, told Vice News much of the same a few years ago. “Heart attacks are the second-most common cause of death in the United States,” he said. “Heart attacks are often induced by stress, and there are probably not many things more stressful than having your testicles squeezed.”

So be careful out there, boys. My advice is to protect yourself at all times, don’t get involved with crazy people and if you must participate in a cockfight, make sure your rooster wins.