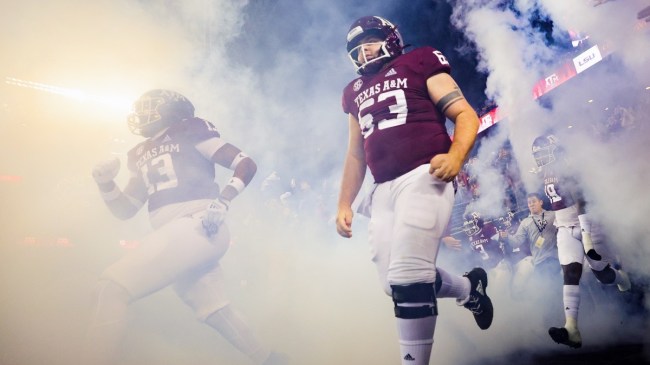 It was a nightmare season for Texas A&M. The Aggies were the sixth-ranked team in the preseason, and yet found a way to lose seven games. Along the way were a series of events that would be rejected in the writer’s room for a low-budget soap opera. Whether it was star freshmen recruits speeding through a parking drive, an alleged incident involving marijuana in the locker room, or yell leaders embarrassing the entire school, they had it all.

And, after bringing in the nation’s top recruiting class last year due in part to a lot of NIL money, things aren’t as sweet this time around. They’re not recruiting as well, and players are looking to get off of a ship that looks more and more like it’s sinking. They did end their season with a nice win over LSU on Saturday, but it hasn’t stopped the bleeding.

A potential mass exodus from Texas A&M has already begun.

On Sunday, news came out of various Aggies entering the transfer portal.

Three Aggies have entered the portal in since Saturday evening.

First, it was Elijah Jeudy. The talented defensive lineman was a top 247 recruit in the 2021 class and has bulked up to nearly 300lb. He will have three years of eligibility left and will be a big target for many teams. This loss may not hurt the Aggies a lot though, as they are loaded on the defensive line.

But, they will also lose running back LJ Johnson. The second-year player was a top 50 recruit in the 2021 class. He carried the ball 10 times for 39 yards this season. But, again, he will be a hot commodity on the portal.

He held a total of 40 offers including Oklahoma, Texas, LSU, and others.https://t.co/MtzIQdfei9 pic.twitter.com/KkpkV0mEbK

The final entry so far is linebacker Ish Harris. Harris was a top 400 recruit in the country in the 2022 class. He didn’t record any stats as a true freshman, but his size and athleticism will make him attractive in the portal.

He held a total of 18 offers including Oklahoma, Texas, Baylor, Michigan, and others.https://t.co/DI9dC4zvAV pic.twitter.com/f9dng6Yp14

It remains to be seen just how bad the exodus will be for Texas A&M and Jimbo Fisher. But, it certainly will not be boring.