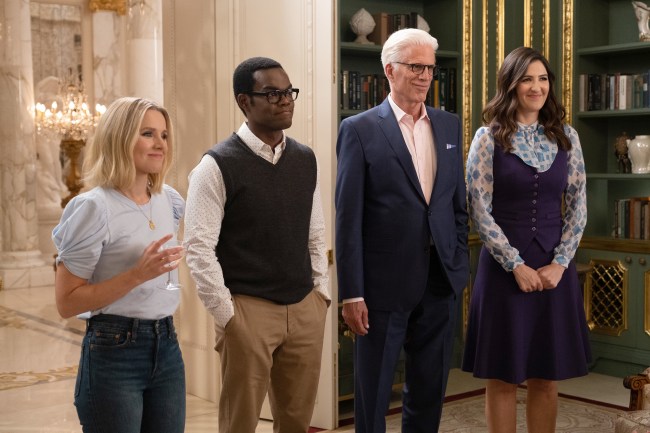 The Good Place ended Thursday night and I really can’t stop thinking about it. More than any other show I’ve ever watched, The Good Place put my brain through the paces. It tied it into knots, broke it, put it back together, smashed the shirt out of it, zip-tied it together, and above all, routinely challenged it and lit a fire under it.

What a wonderful twofer, huh? How often can you both question your existence and wipe tears from your eyes from laughing at the same time?

Over four seasons, The Good Place took the kind of chances we should all want from the entertainment we consume. From the jump, it was a big ask. It was a comedy set in the afterlife but one that made you question the nature of the afterlife. It made you wonder what actually made a person a “good” person and what made them a “bad” person. We have debated the difference between right and wrong before but it never felt like it did on The Good Place.

That first season, which ran in 2017 (although that feels like it was much longer ago than it really is), rambled down the road by introducing high-arching philosophical concepts and a plethora of ethical dilemmas, the biggest of which was whether or not the show’s resident philosophy expert Chidi (William Jackson Harper) should help Eleanor (Kristen Bell) stay in the titular Good Place even though they both knew she shouldn’t be there.

Is it okay to break the rules if you are breaking them to make someone a better person and help them see the error of their ways?

And then the whole damn thing flipped.

The show took everything it had done throughout that first season and literally turned it on its head as it was revealed in the waning moments that they weren’t in the Good Place but…the Bad Place! On top of that, they were in a version of the Bad Place designed specifically to torture them.

It’s true. Hell really is other people—specifically these people.

From that point on, the show took off.

How do we treat each other and why does that matter? What does it mean to be a good person? Are we stronger alone or together? Should we concern ourselves with the greater good or the individual good? What’s more important: what we owe to ourselves or what we owe to each other? Would you kill one person to save five people? Are there really Jacksonville Jaguars fans out there?

Week after week, the show presented ideas and theories meant to challenge its audience and it was surprisingly enjoyable.

Without fail, my wife and I would pause The Good Place at least one time per episode and ask ourselves the questions the show’s characters were asking. This would result in anywhere from a brief discussion to a twenty-minute one. It wouldn’t end there. More often than not, the conversation would continue into the next day (if not into that weekend).

That’s what I’ll take away from The Good Place: the pleasure I found in interacting with it as if I was somehow more of a part of it than someone just watching from home. There is so much passive entertainment out there today; stuff we consume and then just move on from before flipping quickly to what’s next on the list. Rarely do we actually sit with something and wrestle with the ideas and situations it presents.

You could certainly do that with The Good Place and I wouldn’t think any less of someone who did watch the show from a passive standpoint. But I would feel bad for that person because they missed out on the full Good Place experience. You can laugh at the jokes and you can hope that Eleanor and Chidi find happiness but what ties it all together is what you yourself got out of it.

There was a moment in the show’s penultimate episode, “Patty,” that drove this point home for me. In the episode, the show’s six main characters all finally reach the actual Good Place. They had been to Hell and back (and back again and then again and, yes, again) but they had made it after all. It was a cause for celebration if there ever was one.

But the joy was short-lived because it quickly became apparent to the crew that there was something wrong. People seemed happy but they also seemed tired of happiness. They were just going through the motions as opposed to actively enjoying paradise.

How could this be? It’s the Good Place! It’s Heaven! What could possibly be wrong with living in eternal paradise?

Then it dawned on them: it was the “eternal” part.

If happiness goes on forever, how do you not become numb to it? If you can have everything you want, at some point, you’re not going to want anything more. Where does that leave you?

It leaves you blank-faced and slow-witted in the warming glow of paradise while you watch the hours endlessly tick by.

The way to fix this was to create an opt-out clause and create an endpoint. We need to know happiness can end at some moment for us to truly enjoy it. We need pleasure to be finite. If not, then it loses its luster, which is what had happened in the Good Place.

It’s like a vacation. Vacations are great but part of what makes them great is they don’t go on forever and are a set amount of time away from everything. Everyone reaches a point during a vacation where they are ready to go back home and resume their lives. Knowing home is there makes the vacation that much enjoyable. If there’s never a trip home, at some point, the vacation is going to become less enjoyable.

A little while back, I was in San Diego for a few days for work. If you’ve ever been to San Diego, then you know that it’s God’s country. It’s perfect. The weather is literally the ideal temperature. I couldn’t help but think that I was blowing it by living on the East Coast and should pack up and head west.

When I did return home to Philadelphia, it was a cold, rainy February night. It had snowed a little bit while I was gone and piles of it made it tricky getting into my building. Having just come from sunny San Diego, it would make sense for me to curse the Philadelphian ground I walked on and book the next flight back across the country.

But I found myself doing the exact opposite.

The absolutely shitty conditions in Philly actually made me crack a smile. I appreciated the city and the weather and the general state of misery that came with it all. As I walked up to my building, I couldn’t help but look even more fondly back at those few days in San Diego and look forward to possibly going there again sometime. I didn’t think I needed a ton of help falling in love with San Diego but not being there definitely moved the needle.

Fast forward a few years, I’m once again thinking about that very idea thanks to a sitcom on NBC. That’s not going to happen if I’m watching anything else, and while that’s totally fine in a way, it also highlights just how unique and special The Good Place was.

I don’t know what else we could ask for.