Disney Continues To Flex On Everyone, Drops A Trailer For ‘The Lion King’ Featuring The Movie’s Most Iconic Song 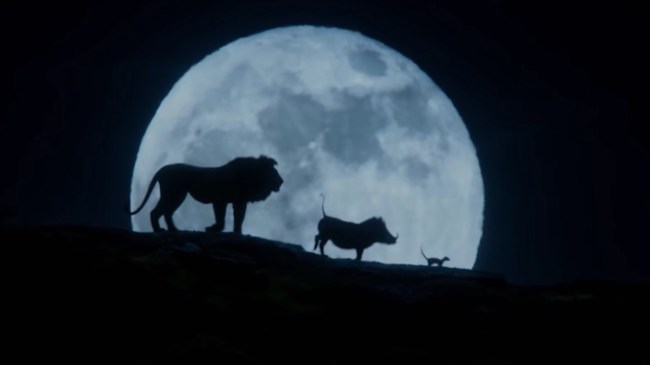 There are two types of people in this world: there are the people who are excited about the “live action” remake of The Lion King, and there are fucking liars.

Disney has been churning out these “live action” remakes (I keep putting “live action” in quotes because, well, we’re talking about lions that can sing, which certainly aren’t alive) for years now, starting with the Johnny Depp-starring Alice in Wonderland back in 2010.

Since 2010, Disney has churned out modern day remakes of legendary films such as Maleficent, Cinderella, The Jungle Book, Alice Through the Looking Glass, Beauty and the Beast, Christoper Robin, Dumbo, and Aladdin.

However, as admittedly iconic as all of those titles may be, it can be argued that The Lion King is the biggest of them all.

Originally released in 1994, not only was The Lion King the highest grossing movie of the year, but it eventually went on to become the second-highest-grossing film of all time (at that time), which — for an animated film — is beyond impressive.

Now, a quarter of a century after the original film’s release, Disney is back with a modern update of The Lion King to captivate another generation. And if the film’s trailers are any indication, the 2019 version is going to be just as excellent as its predecessor.

In a recently released TV spot, Disney gave fans a taste of the film’s most famous song, “Can You Feel the Love Tonight”, only this time, instead of Elton John and Tim Rice, it’s performed by the Donald Glover and Beyonce, who will be starring as Simba and Nala (like we said, Disney is FLEXING).

The Lion King, helmed by Iron Man and The Jungle Book director Jon Favreau, is set to be released in theaters in the United States on Friday, July 19, 2019.