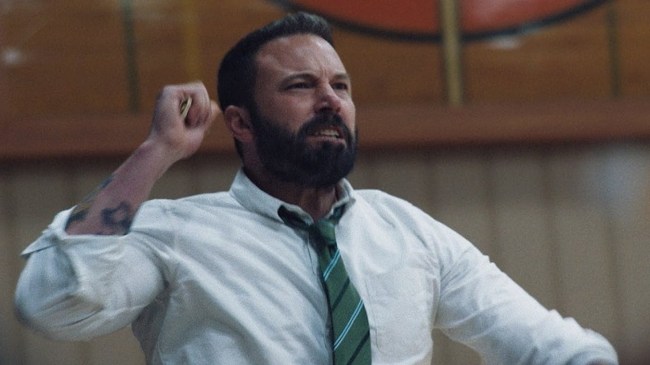 Ever since The Way Back released its first trailer a few months back, I’ve been absolutely hammering that Ben Affleck-playing-himself joke you see in the title above you. Perhaps too much. You know how there was that fringe friend in middle school who would go too hard on the inside joke and ultimately kill it? That’s essentially me with the Ben Affleck playing Ben Affleck jokes.

But, guess what: that’s just too fucking bad, because I find it — not the role, but rather the idea — hilarious. All the respect in the world to Ben Affleck and his very personal and public struggles aside, him playing an alcoholic seeking redemption is simply too meta to be ignored.

That said, I’ve never questioned whether or not the movie will be good. Affleck, despite his critics, can act his ass off when he wants to and Gavin O’Connor is one of the sneaky best directors you’ve never heard of. You’ve heard of his movies, though, as he’s helmed films such as Miracle, Warrior, and The Accountant during the course of his career.

And based on these early reviews, it turns out that my gut instinct was correct, as critics seem to think that Affleck’s turn as the small town basketball coach version of himself is a powerful one.

IndieWire: “Affleck’s underplayed performance as an alcoholic basketball coach might be the most personal work he’s ever done on screen…. Whatever strides Jack makes can only be measured in millimeters, but Affleck ensures that he earns every step. Winning and losing are relative terms, but this is the first time in forever that Affleck feels like he’s got skin in the game.”

IGN: “With The Way Back, director Gavin O’Connor (Warrior, Miracle) has prepared a very familiar and very comforting, audience-pleasing stew.”

AV Club: “Ben Affleck dunks on his demons in the miraculously non-corny basketball drama The Way Back.”

The Hollywood Reporter: “Affleck gives the impression of intimate familiarity with the anguish and self-disgust that dominate Jack’s life; this character and project clearly meant something important to him, as the title bluntly suggests, and he gives it his all without overdoing the melodrama.”

The Wrap: “Given his remarkable honesty about his own alcoholism, Affleck feels like the ideal person to portray that experience on screen. But led by O’Connor, a collaborator who had his own near-miss with superheroes before returning to the intimate, humanistic material that showcases his reliable, gifted storytelling, “The Way Back” proves to be the kind of hero’s journey that audiences really need, even if it’s not the one they think they want.”

The Way Back hits theaters nationwide on Friday.