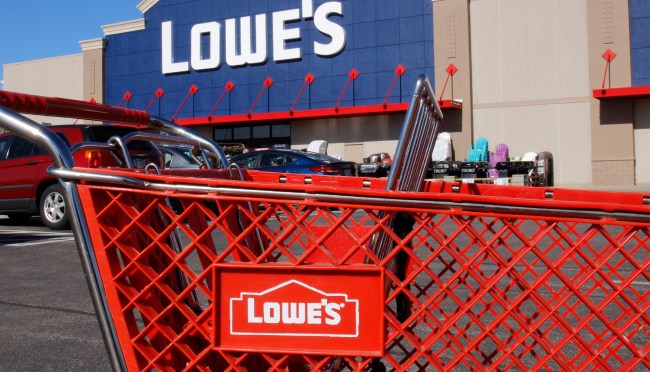 In one of the most bizarre things ever caught on video and shared to TikTok, two thieves were caught on camera blatantly walking out of a Lowe’s in Oregon with carts full of stolen goods, right in front of the store’s employees.

The two shoplifters nonchalantly took thousands of dollars worth of electrical goods and wiring and made zero attempt at concealing their efforts.

The theft, which took place in broad daylight in Keizer, Oregon on August 25, is being investigated by local police as video of the robbery has been shared on numerous social media platforms, including TikTok, Twitter and Facebook.

“It was so blatant, that’s what riled me up,” local electrician Andrew Sullivan told the Keizer Times. “They were just strolling through the parking lot, just riding the carts.”

Sullivan, who filmed the incident, said that a single spool of the Romex wire which was taken can cost as much as $450.

In the video, a Lowe’s security guard asks the thieves to show proof of purchase and is ignored. A second employee begins to approach the criminals, but is intercepted by the guard who told them, “Hey don’t do this. It’s not worth it.”

“I think these guys have done it before because they seemed to have a good system. One guy with the car and two guys with the carts. They knew no one was going to touch them,” said Sullivan.

Keizer Police Lt. Andrew Copeland said that many jails in Oregon not incarcerating shoplifters due to overcrowding and COVID-19.

“Once you’ve stolen from Lowe’s once and know they can’t stop you, there’s no real consequence,” said Copeland. “Second thing is, these people know they can’t go to jail.”

Copeland also pointed out that employees at many chain stores are told not to physically stop shoplifters.

He added that even if caught, the two thieves would most likely just be fined, cited and released.

The police department says it didn’t even receive a call from Lowe’s to report the crime until the following afternoon.

“In order for us to arrest someone, we have to have a victim. If Lowe’s chooses not to report it, we can’t do anything,” said Copeland.

Needless to say, many viewers of this incident were furious it was allowed to happen.

“When there r no consequences the criminal will be a criminal,” one person wrote on TikTok.

“Lowe’s doesn’t eat the cost, it passes right on to you and me. Ridiculous,” someone else wrote on Twitter.

Based on that TikTok video, it’s pretty easy to see why.