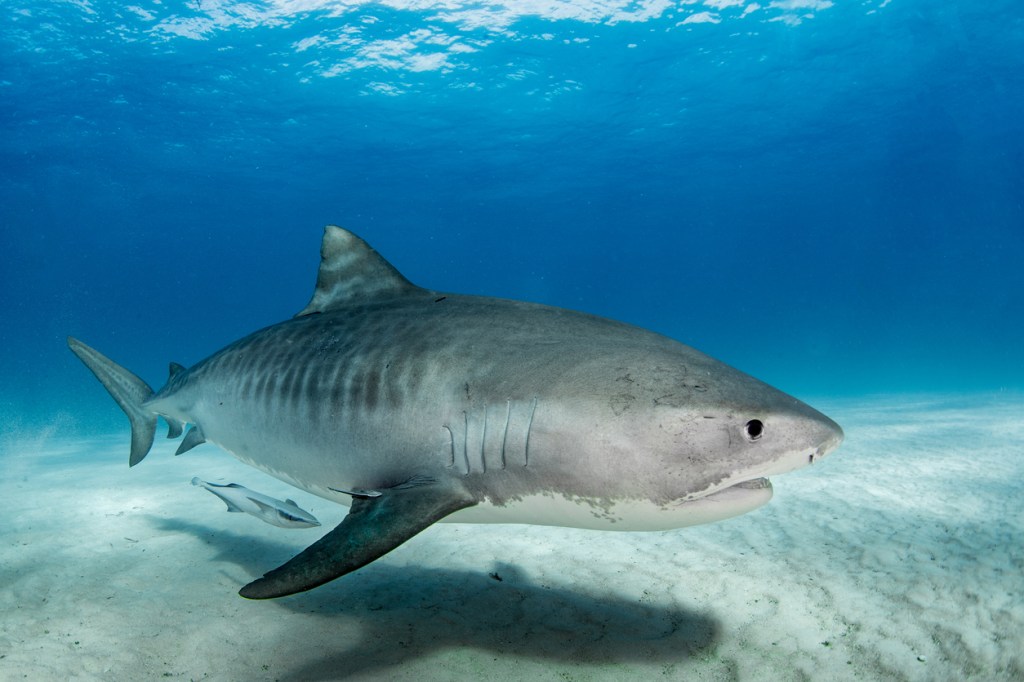 It’s not unreasonable to think the phrase “cast iron stomach” was created to describe the tiger shark. They eat anything and everything if the moment is right and people have found all sorts of strange items in the bellies of tiger sharks.

Just to give you a quick idea of what’s been found inside these sharks over the years, items including license plates, rubber boots, canned food, a bag of money, and a full suit of armor have all been reported inside tigers. They’re just built different.

So it shouldn’t come as a shock that this tiger shark swallowed Swiss filmmaker Zimy Da Kid’s Insta360 ONE X2 waterproof camera. But what is shocking is the resulting footage. The camera was rolling and it captured what it’s like to be swallowed by one of these sharks. Zimy Da Kid was on a dive in The Maldives when this happened and his footage has since gone viral on Instagram.

Unique Teeth On This Species

It’s amazing that this shark was able to swallow the camera out of curiosity and then regurgitate it without any of its inch-long teeth puncturing the camera’s case. Tiger Sharks have pretty unique teeth. This is the second-largest predatory shark species behind the Great White and they can grow up to 18-feet in length. On average, their teeth grow to about 1-inch and there are 48 identical teeth across the top and bottom.

Now picture 48 inch-long razor-sharp knives and somehow this camera bypassed all of those and made it out without being damaged. These sharks also have a bite strength of 6,000 pounds per square centimeter which is strong enough to make sea turtles and their incredibly tough shell a regular meal for the species.

Additional Footage Of Tiger Sharks in The Maldives

He captured some additional footage on the Maldives dives with tiger sharks and the resulting footage was surreal. If you’re not familiar with this guy’s Instagram feed then now is a great time to smash that ‘follow’ button.

This recent dive was part of an expedition with Deep Sea Guardians and it took place on April 8th. This was the teaser video they released ahead of the epic adventure:

According to For The Win, the camera was attached to a weight so after the tiger shark coughed it back up it stayed in place until they were able to retrieve it.

I covered this story late last Summer but I wanted to bring it back today. Jim Abernethy is an ecotourism operator, conservationist, and Emmy-winning cinematographer who has been diving with Emma the Tiger Shark for 20 years. The two were separated for a year when the global health crisis hit and Jim was unable to go SCUBA diving.

Sharks are sharks. Attributing ‘best friend’ behavior to a shark is a potentially dangerous and possibly lethal act of anthropomorphization. Yet, Emma the Tiger Shark genuinely seems at ease around Jim and as he says it, was eager to reunite. At the end of the day, this is still a wild animal but the familiarity between these two cannot be denied.

Here is another recent clip Jim shared from ‘Tiger Beach’, an infamous diving location on the west end of Grand Bahama Island where divers can find a plethora of sharks and shark species. This location is considered to be the best location on planet earth for diving with Tiger Sharks. From these two clips, it’s easy to see what the hype is all about.

The idea of getting completely comfortable around any wild animal just doesn’t sit right to me. Even if this was a great story about a diver and his Tiger Shark best friend. I’m sure there are many layers to this story and this diver knows that specimen and species a million times better than I ever would.