Tokyo Olympics Chief Is Facing Backlash Over Sexist Remarks: “Meetings With Women Take So Much Time” 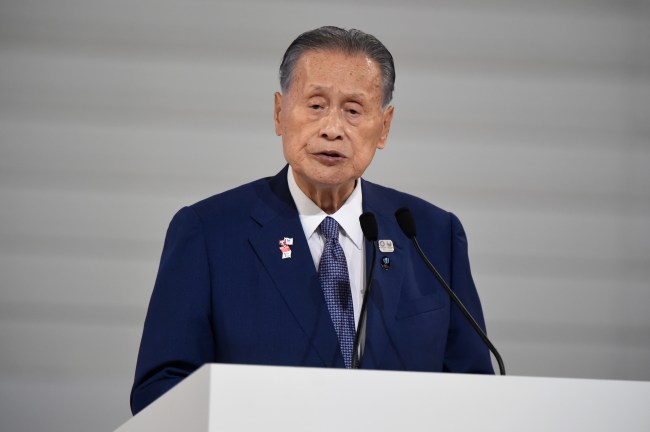 The chief of the Tokyo Olympics, 83-year-old Yoshiro Mori, finds himself in the thick of it after making a sexist remark on Wednesday:

Sexist remarks made by Tokyo Olympics chief Yoshiro Mori have drawn fire at home and abroad, in a further blow to organizers who face criticism for persisting in holding the event this summer despite rising COVID-19 infections and costs.

“I apologize and am remorseful for the remarks,” Mori told reporters in Tokyo on Thursday. He said he “withdraws” his comments as they were inappropriate and against the Olympic spirit. However, he said he has “no intention” to step down.

Mori, 83, on Wednesday said board meetings with a lot of women “take so much time,” in comments about a government initiative to increase representation of female directors. “Women have a strong sense of competition,” and that is why “everyone speaks” so much, he added.

Yeah Mori, that’s not gonna work. Not today, not yesterday, probably not since… ’95ish? I don’t know my sexism history all that well, but I think it’s been a while since the person running the Olympics could deliver gender-based stereotypes without backlash. Is it the worst sexist remark we’ve heard? Nah. Does it matter? Double nah. One size fits all, chap. Out you go.

You know what’s sad? Miro immediately realized he’d said something TOTALLY out of bounds and tried to pull the old “really, I mean it as a complement.” He quickly added “Women have a strong sense of competition. That’s why everyone speaks.” That makes it fun! Competition! Spirit! Olympics! You guys get it, right? You get what I meant?

And that’s when he looked up, and everybody in the meeting was doodling nervously on their notepads.

That said, he’s 83-years-old. Obviously he doesn’t get a pass, but is anyone surprised? It’s like that Chappelle bit about the disgraced former Clippers’ owner Donald Sterling, where he said that people shouldn’t have been surprised whatsoever by what he said. The guy was EIGHTY when he asked his mistress to stop bringing black people to his games. As Chappelle said, it’s surprising it wasn’t worse.

Old people get to a point in their lives where the intake valve of information shuts off. They simply hit their capacity for new stuff. There might be more room in their brains, but there’s really no point in stuffing it in there. The more stuff they learn, the more stuff they’ll forget. Some elderly folks refuse to learn the new, correct way to identify people of emerging sexual identities. Others, like Yoshiro Mori, haven’t learned that you can no longer say that meetings with women take a long time.

In the case of my grandfather, it’s technology rather than racial or sexual progress. Guy simply will not update the software on his iPhone. He likes knowing where things are and doesn’t care if Google Maps gets a little buggy. In some ways, we’re lucky. He’s not a threat at a restaurant; he’s just a threat to any family members whose personal or banking information he might have saved.

In any case, not to worry Mori. Even if you get fired, it’s entirely possible the Olympics don’t happen. If you get fired from something that never happens, then technically, were you even fired?