Tom Delonge Takes Credit For The Gov’t Revealing Existence Of UFOs, Explains How It All Went Down 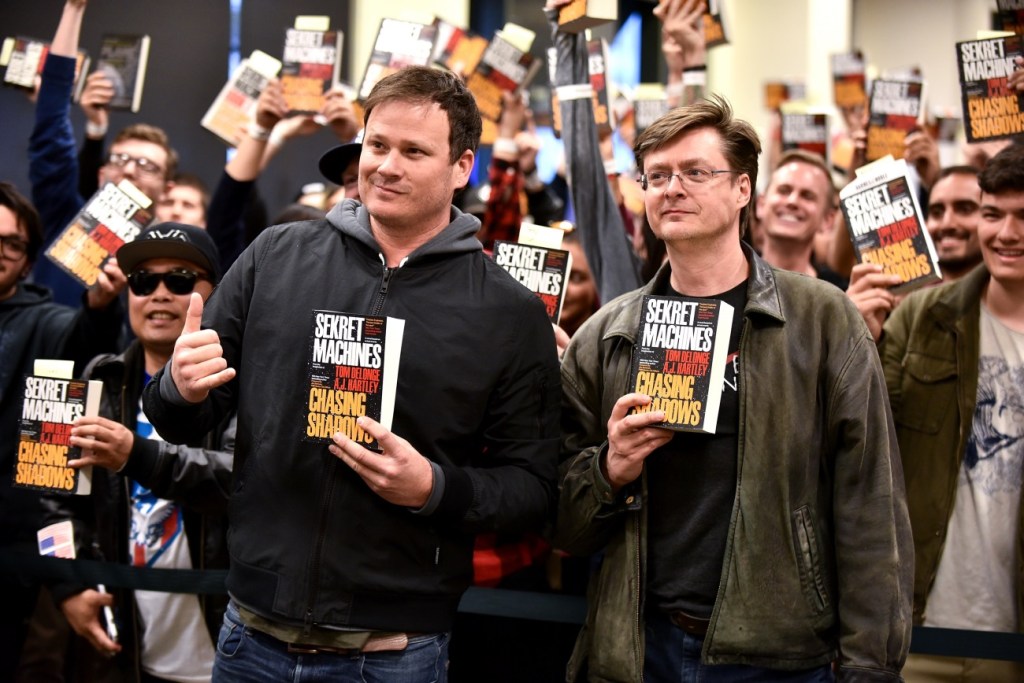 Blink-182 co-founder, singer, and guitarist Tom Delonge recently joined Steve-O on the Steve-O’s Wild Ride! Podcast to discuss everything under the sun. In his own words, Tom Delonge has been studying UFO’s ‘for like 20 years’ and Steve-O brought that up about 20 minutes into the interview below. I’ve transcribed a huge chunk of their discussion and added the video below.

I’d like to just put a blanket warning here that there’s no way for me to independently verify even a fraction of what Tom Delonge says in this interview below. He talks at length about how he’s responsible for the government acknowledging the existence of UFOs.

To some people, these will sound like conspiracy theories. To others, Tom Delonge’s story will sound like the great reveal about UFOs. I’m just sharing this video from Steve-O’s podcast for anyone out there who wants to believe or have a little fun with it. For a rundown of the videos that Tom Delonge got the government to reveal you can check out our previous article right here.

Steve-O: “I think that there’s two things that really strike me as crazy about the development with UFOs. Number one, it’s crazy that the government is all of a sudden just sort of saying ‘yeah, UFOs are real!’ … Like the government (is) acknowledging (it).”

Tom Delonge: “You know we did that? I did that. That’s why they’re doing that. I sound like a d–k when I say that but I’m like, that’s why. There’s a whole story here but keep going.”

Steve-O: “It’s crazy to me that the government’s acknowledging UFOs are very real and it’s EVEN CRAZIER that that news comes out and everyone’s like ‘oh, shrug.'”

Tom Delonge: “Yeah, they’re all like ‘interest rates are gnarly’ and you’re like ‘what the f–k?’ That’s how a lot of us feel. What happened was that book, Sekret Machines, I wrote that with an author and I started my company To The Stars, and we’re gonna publish a book and then when I put it in there…

So I spent a long time working my way in and then I got into a group of people and they brought me in and I was given all the permission. So then I come out with a book and I go on national radio and all this s–t.

Well, apparently that group didn’t really talk to another group of some other 3-letter places (ex. CIA, NSA, etc) and those other places got really f–king pissed. Because here’s this rock star kid like telling the biggest national security secrets that we got, period.

And so they came and they were like ‘we need to know who the f–k you are and who the f–k you’re talking to and all this crazy Ed Snowden-type s–t. And I was like ‘hold on’ and I had to explain that all this really classified crazy s–t I figured out on my own. I don’t have anyone passing me…”

Here’s where things started to get serious…

Tom Delonge: “(joking) So I’m all ‘I was stoned one night and I just kinda did a puzzle and I was like whooaaa’… So what happened then was Hillary Clinton was running for Presidency, I guess it was against Trump, and John Podesta was her Campaign Manager. At the time, he was also Senior Advisor to Obama.

So I was holding conversations with Podesta to get to Obama and I had two multi-star generals from Space Command and the head of Lockheed-Martin Skunk Works… Skunk Works built Area 51, their elite engineering division… So I had them all on this email like setting up these conference calls and stuff.

Well, Hillary Clinton’s campaign got hacked by the Russians… Wikileaks… And outed all this s–t about Podesta and her and what happened with that was when all these news journalists were pouring through Wikileaks to see what spilled from Hillary’s campaign they found these f–king emails with me and Podesta talking to these generals about UFOs.

Steve-O: “Let me ask you, why would that be a problem for you? There’s nothing wrong with exchanging emails.”

Tom Delonge: “That wasn’t the issue. The more of the issue was like all these guys are holding the secrets of the universe… What would happen in conversation is I just knew things, so I would say it. They might not say something back. But I’m kind of thinking that any of those conversations should not be poured over by anybody that wants to just come in and make a name for themselves at the Bureau.

What happened though is it gave me all of this credibility because then all of a sudden all these other people in the government knew that I was like hanging around with some big boys. So they all came out and said there’s a better way to do what you’re doing and then that’s when my company became something bigger.

So the company came out the public founded by myself, one of the heads of the CIA, and the Head Physicist for the UFO Program and then I hired the program director, the guy that ran the UFO program, and then I brought on another like 8 people from the DOD and CIA. So they’re all part of my company and the first thing we did was take those videos to the New York Times and out the program. And then we went and spent two years briefing on all the committees in the Senate and Congress and the Office of the Director of National Intelligence.

So now you’re seeing hearings… The DOD admitted UFOs are real… The Navy admitted… That’s all us.”

That segment where Tom Delonge takes credit for the government acknowledging UFOs is just one tiny segment of this interview. And what’s so great about this is they didn’t even mention Blink-182 once in that talk. This is one of the biggest alt-punk rockers of the late 90s and 00s and the dude just rattled off a discussion about UFOs.

I would like a little more explanation of how Tom Delonge ‘just knew things’ about UFOs without being told. Maybe he mentions all of that in his book that I’ll get around to reading one day.

Make sure to smash that ‘subscribe’ button on Steve-O’s channel if you haven’t yet! He gets some of the best guests for the best interviews around.