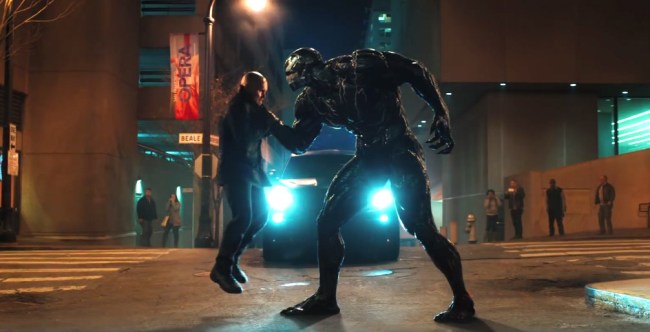 One of the more interesting movies coming out in the remainder of 2018 is the Tom Hardy-led Spider-Man spinoff Venom.

While Sony hasn’t had the greatest track record when it comes to Marvel movies, Spider-Man: Homecoming has many fans of the genre optimistic for the feature film focused on the alien symbiote anti-hero.

A lot of that reason for optimism is the fact that the main character Venom is being played by Tom Hardy in the movie. Especially since fans have already seen how well he handled a comic book when he played Bane in Christopher Nolan’s The Dark Knight Rises in 2012.

In a recent interview with RTÉ Entertainment, Hardy explained some of the inspiration he used to portray a wild character such as Venom, and one of those main inspirations was none other than “The Notorious One” himself, Conor McGregor.

“There were more elements of Eddie Brock [Venom in human form] which needed to be pinned on somebody who’s incredibly handy physically. And, obviously, Conor is incredibly handy physically,” Hardy explained. “There was an aspect the studio wanted somebody who could fight, which they always do in these sort of hero movies. They want somebody who can have a scrap. Conor obviously wants to have a scrap with everybody, so that’s useful.”

“But then, there were elements like the neuroses of Woody Allen,” he continued. “So, if you put that and Conor together, there was that too.”

Now there’s a combination I never thought I would see.

As for McGregor being someone who “wants to have a scrap with everybody?” Yeah, that seems about right.

Venom’s got nothing on him…

yoooooo… first time seeing this one. Conor has legit lost his mind. pic.twitter.com/XcLFd2FIMo

When asked if he thought McGregor would be offended or flattered by the inspiration, Hardy replied, “I don’t think he’d be bothered, really. Conor doesn’t strike me as the type of person who might be that bothered!”

Hardy also added, “Then there were bits of Harrison Ford as well from Indiana Jones and other elements within. He [McGregor] was definitely a key note, but I don’t know if you’d recognize him in the portrayal. It was more of an interior choice, if that makes sense.”

Not really, but you do you, Tom. It’s worked very well so far.