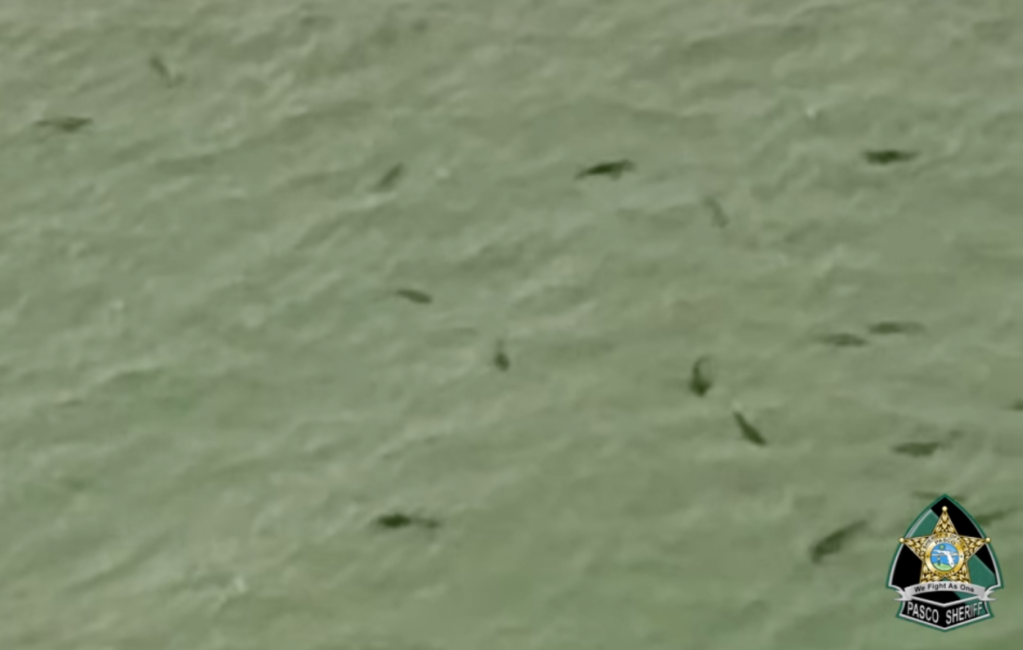 Eye-opening helicopter footage from Anclote Key State Park just off Clearwater and Tampa reveals the sharks have arrived for tarpon fishing season. It happens every year. The tarpon show up in huge numbers between Boca Grande and Tampa Bay as they’ve migrated here all the way from Africa and through the Caribbean and the sharks follow them closely.

Tarpon fishing season in Southwest Florida runs from late Spring through early Summer. The ‘Silver King’ can be caught year-round in South Florida and throughout the Caribbean but each Spring, this stretch of Florida becomes the hottest tarpon fishing spot on the planet. And tarpon is a favorite meal for many species of sharks.

A helicopter flying over Anclote Key State Park captured this eye-popping footage showing TONS of sharks in the shallows just off the beach. Check it out…

The first time I ever went parasailing was on a family vacation to Captiva Island in Southwest Florida. Unbeknownst to me at the time, there was a popular shark fishing tournament happening when we hopped on the boat to go parasailing.

This meant there were a ton of fishing boats in the area all dumping ‘chum’ full of fish guts and blood into the water to attract sharks. So when I strapped into the parachute/parasail behind the boat and they lifted me up into the air I saw almost exactly what I just witnessed in that video above, sharks everywhere.

Ultimately, I was safe. If you’ve ever been parasailing you probably experienced the thing where the boat slows to a stop and they dip your feet in the water. That happened when a 7-foot Lemon Shark was probably 40 yards away and it was scary but nothing happened. I was young and it was probably the closest I’d ever been to a shark (in the wild) at that point in my life.

And there’s no reason to believe anyone was in danger from those Anclote sharks. It’s startling footage, yes, but we should expect to see sharks anytime we’re in the ocean instead of being shocked by their presence. At least that’s what I’ve convinced myself of.

It is interesting to see that many blacktip sharks on the Gulf Coast. I tend to associate them with the East Coast where their annual migration is much more visible because of all the high-rise condos right on the Atlantic. Here’s what that looks like on the East Coast:

Just keep your head on a swivel if you are swimming in salt water with low visibility. If there are fish jumping around you and predators appear to be feeding then get out of the water. Use common sense, that’s the best approach.