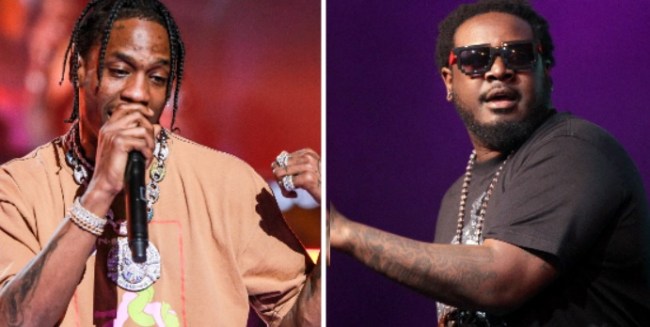 Last week, T-Pain went on Instagram live and described a situation in which Scott said he agreed to record some songs with him but ended up standing him up several times without contacting him.

According to T-Pain the two rappers had agreed to meet at the studio on the 14th to the 18th of the month. However, Travis didn’t show up to the sessions. At first, T-Pain gave Scott the benefit of the doubt when he didn’t show on the first day of the recording sessions “obviously the guy hasn’t had enough sleep, so it’s the 14th, the first day, no big deal,” he admitted. “The 15th comes, he didn’t show up. Now, mind you, this was after he had me order these new speakers that I have to pay $500 for daily!”. T-Pain was left shocked when Scott never came to any of their pre-scheduled recording sessions.

He explained that he tried to reach out to Travis on the days he didn’t show up, but no one could contact him.

“Nothing, not one thing. With me! Nothing from Travis Scott’s team. But Instagram, Tik Tok, Twitter, Facebook, everything fully active whole time. Didn’t skip a goddamn beat. I seen that he was on Fortnite. Hit him up on private chat, nothing. That’s cool.”

2.) The fact that Travis Scott had this man PAY A DAILY RATE FOR SPECIFIC SPEAKERS JUST TO GHOST HIM FOR DAYS is what it is for me. How trifling & disrespectful. pic.twitter.com/dfeVd0tGHR

Pain also went on to share an incredible story of how Scott fell asleep while standing up in the middle of a conversation.

T-Pain telling the story about Travis Scott falling asleep on him in the studio. pic.twitter.com/7lSPJ7xyhg

“I started going into how I do production and the whole time I’m looking at my computer, and he’s back there with his homeboys,” “I don’t know what they’re doing back there.” “Eventually, I turned around…and Travis and his crew were all asleep! “Everybody in the room is dead asleep,” “Knocked the f*** out. Travis is somehow also asleep…standing up.”

Rap fans were outraged at how disrespectful Scott was to T-Pain and blasted him on Twitter.

Not T-Pain laying the blueprint for these rappers to use autotune the way that they be using it and them being unprofessional in return https://t.co/VKpyyJ8zGC

I just found out rappers are being mean to T-Pain and it’s not sitting right with me pic.twitter.com/Pmj8HeqXDl

I don’t like how new artists are playing with T-Pain like that. Like he didn’t have 2006-2009 on lock, like he wasn’t responsible for THE cultural reset of rhyming mansion with Wiscansin. Put some respect on his name now

Why doesn’t anyone wanna work with T-Pain. We actually miss him and wanna hear more from him. https://t.co/QYpfGpFmbc

how y’all disrespect t-pain and he gave birth to y’all autotuned genre? don’t add up. https://t.co/8LQsGQscpZ