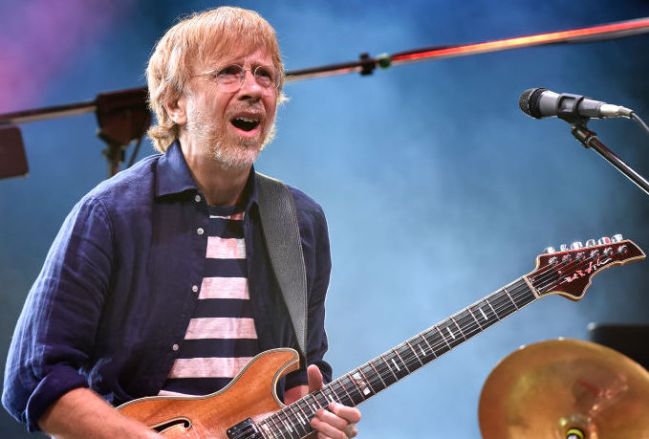 Ever since everything became terrible, there hasn’t been a single industry that hasn’t been forced to figure out how to adapt to this new reality of ours and there aren’t many out there that have been hit much harder than the world of live music. For as long as crowds larger than even the most sparsely attended café open mic night were out of the question, in-person shows were going to be on the shelf. Was anyone that happy about it? No, but “No One Was That Happy About It” is a top contender for the epitaph on 2020’s gravestone, and like everything else, we were forced to power through.

As time went on, musicians started to navigate the ins and outs of the various health and safety restrictions in place and began dreaming up ways that they could play concerts. There was an evolution of sorts, beginning with artists performing stripped-down shows in their homes before doing the same thing in rehearsal spaces and we eventually reached a point where bands were calling up local drive-in movie theaters and playing shows there for socially-distanced fans largely confined to their cars.

However, it’s likely virtual concerts will be the standard for the foreseeable future, and based on what we’ve seen so far, it’s become increasingly clear what works and what doesn’t. Anything under an hour is a safe bet, but once you cross the 60-minute threshold, things tend to get a bit dicey. Also, production quality still matters; the days of an artist performing by their lonesome in their living room isn’t going to cut it anymore. There need to be some lights, and if we’re being honest, a smoke machine or two shouldn’t be too much to ask for.

After all, the goal of a virtual concert should be to replicate the real thing as much as possible. That’s tough to do. It really is. A screen is separating you from the musician as opposed to being there in person whereas, in a best-case scenario, only a guard rail and a few feet would stand between you and the act performing.

Trying to recreate the live music experience over the internet is a tall order, but with that said, it’s not impossible. I know this, because for the past few weeks, Phish’s Trey Anastasio has been showing everyone how to pull it off. Anastasio has been camped out in New York City since March after seeing both a solo tour and a slate of shows with his legendary jam band suddenly canceled. After deciding he was tired of just sitting around, he announced his plans for The Beacon Jams in October, an eight-show run at the iconic Beacon Theater.

The shows would be streamed for free via Twitch and then available the next day on Live Phish for anyone with a subscription. Each gig would feature both electric and acoustic songs with the musician backed by regular members of the Trey Anastasio Band in addition to some occasional guests (sadly, anyone holding out for a surprise Phish show might be setting themself up for disappointment).

Throughout the spring and summer, Phish kept their fans engaged via their Dinner and a Movie series, which featured archived performances paired with the band’s recommended food pairings (because Phish is nothing if not also considerate). Anastasio’s Beacon Jams were the next logical step, and even though I know I said a primary key to a virtual concert’s success was to keep it to under an hour, he wasn’t going to abide by that rule and I didn’t suspect it would be an issue in this particular case.

It turns out I was right, as aside from the empty seats, there wasn’t much of a difference between the first concert and what we’ve come to expect from Anastasio’s troupe. Bassist Tony Markellis, drummer Russ Lawton, keyboardist Ray Paczkowski, percussionist Cyro Baptista, and the rest of the crew unleashed a lively and energetic set comprised of Anastasio’s solo material and Phish songs such as “Blaze On” and “46 Days.”

What was perhaps most striking about the performance was how the stage was set up. Normally, most acts perform facing the audience for reasons that should be pretty obvious. However, without one, Anastasio was reluctant to go the traditional route and Marc Janowitz (who runs the lights for the artist’s solo projects) came up with the idea of the band facing the back of the stage after walking around the Beacon scouting possible spots where they could post up.

Here’s what Anastasio said about how things came together in a recent interview with Relix:

“In the beginning, Marc and I were talking about setting up in the lobby or maybe in the balcony. Then he walked around and said, ‘The back of the stage is really cool—it’s got these ropes and stuff.’ And somehow that morphed into: ‘Wow, look at this point of view from here.’

So he decided to put lights in the seats and it ended up being the world’s greatest backdrop. It’s like a stadium light show in a theater because the lights are 300 feet above the stage.”

The approach is undoubtedly unorthodox but it somehow manages to not feel weird at all; it’s actually nice to see the picturesque Beacon in the background of the band as they perform (if I had to guess, it might also help with camera angles, allowing the video crew to be closer and in better spots than if the band was facing the other way around).

Because the shows stream on Twitch, viewers are also able to chime in via the comment section, which Anastasio routinely checks and interacts with between songs, often with the casual ease of someone who only recently discovered the internet (his attempts to pronounce certain screen names can be unintentional comedy gold). During a show on October 23, he was particularly amused by someone commenting that they were folding laundry while watching, prompting him to point out how that wasn’t an option “in the old days.” But now? Now you can fold your laundry while watching a show!

Moments of levity aside, responding to the comments has also become a chance for Anastasio to express his gratitude to those watching and to say thank you to the people who have donated to both Phish’s WaterWheel Foundation and his own Divided Sky Fund, a non-profit focusing on helping people battling with addiction currently aiming to open a rehabilitation center in Vermont.

In the press release announcing the run, Anastasio spoke to why that cause was so important to him, saying:

“I’ve been sober for 13 years. It’s a great blessing in my life. We started talking about the idea of a treatment center about a year ago.

I was worried that the project would get derailed because of the pandemic but it didn’t —it actually picked up steam; things are really rolling along now. The Beacon Jams emerged as a way to raise money for it while also allowing me to play for the fans again.”

So far, The Beacon Jams have developed a vibe of pure enjoyment and release on both sides of the screen. Anastasio seems downright giddy at times, often taking a minute to acknowledge his fellow bandmates after a song ends. Likewise, the crew behind him also looks to be truly enjoying themselves, and in a weird way, they’ve started to become the kind of characters you’d find on a weekly sitcom.

Checking in on them each week has created a familiarity with the band you wouldn’t normally have in a regular live music setting. There’s the wild Cyro banging away on his arsenal of equally wild percussion instruments and Paczkowski looking like “Saul from Homeland” (as Anastasio pointed out one week), occasionally cracking a sly side smile and quietly making a dry joke. If Anastasio is the host of the show, Markellis has stepped into the role of dutiful sidekick—the Andy Richter to Trey’s Conan O’Brien—helping the frontman with the pronouncement of screen names and riffing on topics brought up in the comment section.

The Phish community has also come out in full force, as fans have greeted the shows with the same anticipation and setlist speculation that is commonplace at the band’s concerts and Anastasio’s solo showcases. The sense of normalcy and familiarity that such a shared experience has brought with it is a welcome feeling—almost as welcome as the joy provided by the shows themselves. Phish fans (like all music fans) have been dying for live shows to return and that’s become very apparent with the online reaction to these performances. The Beacon Jams have become a two-screen viewing experience at times; watching them on one screen and following the conversation on social media on the other.

It’s also given people something they can use to rally around when it comes to reuniting with their friends, giving them a much-needed excuse to get together (even if it’s only over Zoom) in a time defined by extended periods of isolation. Before one of the Beacon shows, I had a buddy throw a “roll call?” into a group chat, which is a simple but refreshing reminder of the life we once took for granted.

Of course, not every musical act is in a position to pull off what Anastasio has with The Beacon Jams. He partnered with both MSG Entertainment and Twitch for the shows, but you’d have to assume that he’s footing some of the bill. When you consider there’s no ticket revenue or fee to watch online, someone has to be paying for the production crew required to put them together. Is that someone Anastasio? I don’t know. But I wouldn’t bet against that being at least partially the case.

After all of his years of touring, Anastasio probably has a good working relationship with the Madison Square Garden Company (which runs the Beacon) and there’s little doubt that that connection helped make the shows happen. However, you have to assume that there are other musical acts out there who could also phone in some favors, which appears to be the case when you consider similar events have popped up at other locations—like the State Theater in Portland, Maine, whose Conclave series featured various local bands performing at the venue.

Of course, so much needs to happen if shows like these do become the new normal during these abnormal times. For starters, there needs to be places to host them, and based on how things are trending, the pickings are getting slimmer as this situation continues to unfold. Venues across the country are being forced to permanently close their doors and there’s no telling how many still in a holding pattern will eventually crash after finally exhausting the resources needed to continue to operate. Outdoor venues may have an advantage if they can make it through the colder months of the year, but if places like the Beacon can link up with artists with a profile like Anastasio, there may still be some hope on the horizon.

Anyone who tries to capitalize on the success of The Beacon Jams would be wise to take note of what Anastasio is doing; he’s not just playing virtual concerts but creating a mood and a vibe that radiates infectious energy from a stage in New York City around the world.

It may not be all that easy to replicate, but that doesn’t mean acts shouldn’t try. It’s going to be a long winter, people are begging for live music, and at this point, they’ll gladly take basically anything (even if it’s coming virtually). However, if bands decline to settle for “anything” and treat us to something that even close to as special as what Anastasio has treated us to so far, we could be in for some more treats.