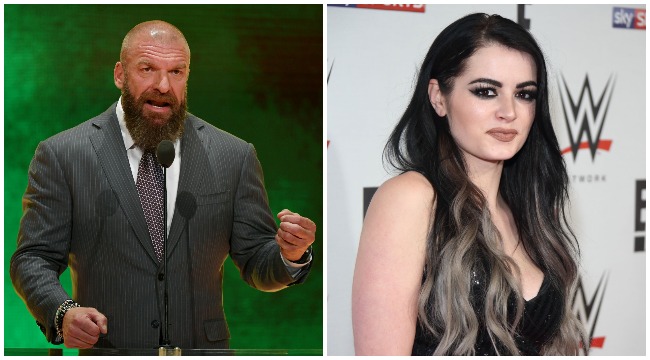 Today in: Celebrity Apologies For Shit The Public Is Going To Forget In 24 Hours, give a warm BroBible welcome to Triple H!

Triple H recently did an oopsie.

A little context: The butt of his joke is WWE’s two-time Divas Champion Paige. In 2017, Paige had sex tapes leaked online by hackers, an incident that left her “publicly humiliated” and experiencing stress-induced anorexia and alopecia (spot baldness induced by psychological stress).

“I’m a fan just like everyone else,” he replied. “I would love to see [Edge or Paige] step into the ring and compete. More importantly than that, though, I would like to see them live long, healthy lives. You know, Edge has kids. Paige—maybe—she probably has some she doesn’t know of.”

Aside from the fact the joke not even making sense (how can a woman have kids she doesn’t know of?), I can see what Triple H was going for–try to bring some levity to a stuffy room in the heat of the moment. I’ll grant him that he didn’t consider the implications of his flippancy.

But I ain’t the victim.

Even my boss jokes about me.. no wonder you guys still do it too. https://t.co/dOmZAiwvyX

Paige expanded on her feelings days later during a UK press event:

“I was a little bit perplexed, a little bit taken back, because he’s someone I truly look up to and he’s always been very respectful. So I just feel like he kinda got caught up, maybe, in a joke … but I just don’t think it was appropriate to joke about.”

We will never see the true change in equality if we just see them as storylines. Change in a company starts from the top. Our leaders help set the example. For us women we need all the help we can get. Help with respect from our co workers and fans. We are all one. One love. ❤️N

Mr. H has reached out and owned up.

I’ve reached out to @RealPaigeWWE to apologize. I made a terrible joke and I’m sorry if it offended her or anyone else.