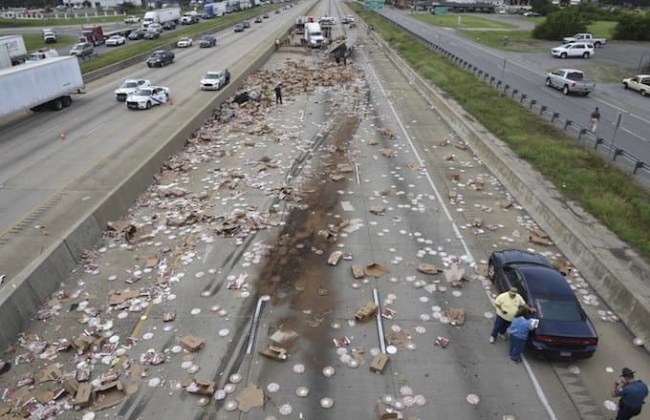 Keep the stoners in Little Rock, Arkansas in your prayers today, as an 18-wheeler was barreling down Interstate 30 when it ran into a bridge support, spilling hundreds of DiGiorno and Tombstone frozen pizzas on the freeway below.

According to the AP, Arkansas highway officials shut down westbound lanes of a cross-country interstate for four hours so crews could help wrangle the pizza casualties.

Feast your eyes on a sad, sad, sight.

It's not delivery, it's (1,000) DiGiourno! Crews scoop up pepperoni pies plastered on I-30 #ARNews pic.twitter.com/2SV9JdLqg1

Agency spokesman Danny Straessle said the bridge suffered only cosmetic damage. He says “there were some people shaken up” but that no one was hurt.

“But there’s a lot of frozen pizzas laying out on the interstate right now,” Danny Straessle said. “Lots of pizza fatalities.”

Not sure what I’d prefer: an 18-wheeler spill of dodgy cats or a tragedy of delicious frozen pizzas. One just shits in a box and pretends I don’t exist while the other lets me forget my problems after a bong rip. I think I’ve made my decision.

I guess one thing’s for sure: DiGiorno is going to have to change its slogan: It’s not delivery, it’s causing a traffic jam on the freeway.