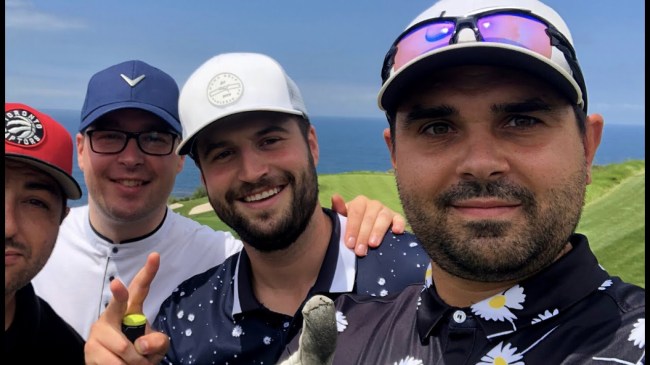 Bobby Fairways and the boys took on Trump National Golf Course in Los Angeles for the setting of vlog No. 3. Let’s put politics aside here because that’s where it belongs, aside. A great deal is a great deal and for 36 holes at this course, that is exactly what it was. Trump National is a course that will humble you instantly when it comes to your golf game. If you think you brought enough golf balls, bring more because you didn’t. I can assure you, if you are anything above a 10 handicap like myself, you are almost promised to be donating at least 8-10 balls to the Pacific Ocean.

For those of you who don’t know my 3 best friends in LA who do these vlogs, gave ourselves the name “The International Carpool” due to our upbringings that then led us to the heart of LA where we all met.

Das Rob- Our German sensation who has a love for the game of golf, unlike anything I’ve ever seen. Also probably the most polite guy you will ever meet. (I guess its a German thing?)

The Big Maple- A degenerate from Toronto, Canada who can chug a 12 pack of beer faster than you can put down a bottle of water.

Joey Cold Cuts- An Italian guy with absolutely no filter in both his words and his outfit of choice on the golf course.

Bobby Fairways-  Just a guy (myself) looking for a good time and a couple of fairways. Good times seem to come often, fairways however do not.

Enjoy the show folks and be sure to subscribe to The Brilliantly Dumb Show on YouTube for more of the vlog and podcast madness.