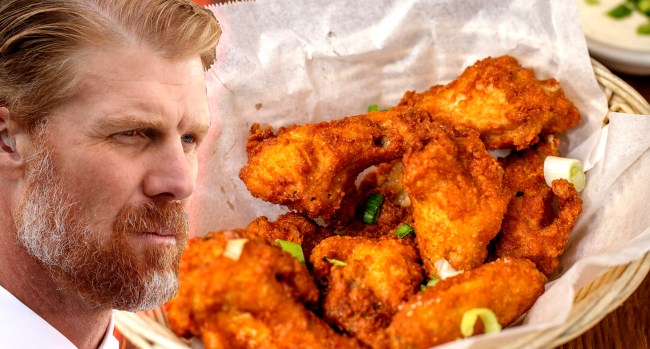 There have been a lot of bad takes over the years when it comes to food. Chief among them are people who insist on putting things on pizzas that have no business being on one.

That being said, we may have a new leader when it comes to asinine things to say about a food item and it comes to us courtesy of former United States men’s national soccer team star Alexi Lalas.

Lalas, who also played soccer in Serie A and MLS and served as general manager three MLS teams, got the internet in a tizzy when he tweeted on Friday, “Wings…a ridiculous food…if it can even be considered a food.”

This unexpected statement by the analyst for Fox Sports was in response to the question, “What food will you never put in your body?”

Naturally, this elicited a boatload of responses and questions.

What is wrong with you?

Wait, what? Maybe that was a autocorrect and you meant kale. You gotta explain the reasoning @AlexiLalas for us in middle America.

Says the guy with “Slurpee Lover” in his bio 🤡

All time bad take, one of the worst I've ever read

Then, just to make himself crystal clear, Alexi Lalas doubled down on his horrible chicken wings take with another absurd tweet.

“Wings are ridiculous,” the Hall of Famer continued. “The ROI is horrible. They are messy, frustrating, and inevitably unsatisfying. Sauces are literally used to cover up the abomination in a basket.”

That was all the internet could handle.

“This is the worst thing you’ve ever said,” one person tweeted back at Lalas.

Another tweeted, “You must hate puppies too.”

“This should somehow be illegal to say and think,” someone else replied.

“This is your hill?” somebody else asked Lalas.

Such a bad take alexi. This isn't helping normalize soccer in america

I didn't think I could dislike you any more. I'm honestly amazed.

what an absolutely horrific take. Congrats, you’re the Twitter villain of the day

Troll on, Alexi. Troll on.