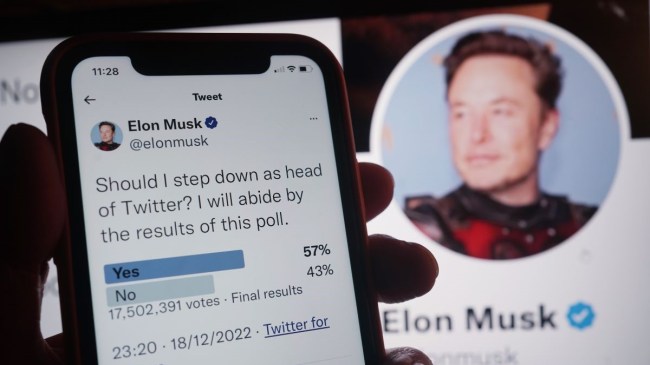 Elon Musk’s reign as the grand poobah of Twitter has been tumultuous, to see the least.

Ever since Musk’s $44 billion purchase of the social media giant in later October, he’s made a number of significant changes to the platform that have users up in arms.

He banned a number of journalists over an incident involving use of flight tracking software to follow his private jet. He re-platformed a number of users who had previously been banned, including former president Donald Trump and Kanye West. Though even Musk seems to have had enough of West’s antisemitism.

He even seemingly put the fate of the leadership of Twitter in the hands of Twitter users. But Musk has yet to follow through on the results of that poll.

The latest change, however, has users united in their outrage.

Though Musk’s latest major change to the platform may be its most meaningless, it seems to have annoyed users perhaps more than any other decision.

Twitter is rolling out View Count, so you can see how many times a tweet has been seen! This is normal for video.

Musk announced early on Thursday that Twitter would now show view counts on each individual tweet. This feature was, of course, already available through Twitter analytics. But the change made it so that the number appeared in front of reply, retweet and like counts.

It didn’t take long for the site’s users to show their displeasure with the change.

the “views” metric being out front on tweets sucks shit

big fan of twitter adding an EXTRA “view tweet activity” button when there already is one :))) pic.twitter.com/e0NR1ELXH9

Why the fuck did you switch the order of the buttons under tweets. Do you realize how horrible this makes the user experience @elonmusk

this "view count" thing is the dumbest feature in twitter history. hey here's the number of people who saw your tweet and completely ignored it. does that make you feel good is that useful to you

Users complained that the new display was aesthetically displeasing. But they also pointed at out that it serves no real function.

Of course, anyone paying attention will tell you that Musk could just as well rollback the decision in the coming days. But for now, the Twitter user experience has changed in a noticeable way and people are not at all happy about it.