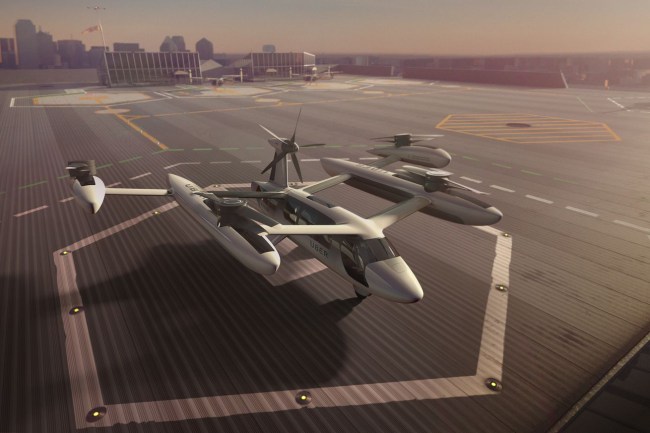 Kitty Hawk, a company backed by Google co-founder Larry Page and Sebastian Thrun, flaunted their autonomous flying taxi called the Cora two months ago. The drone-like aircraft is half helicopter and half plane and now Uber is going with the same kind of design with their upcoming flying taxi.

Uber unveiled the prototype of their flying taxi that could allow the ride-sharing company to expand their services to the skies. At the second annual Uber Elevate Summit this week, the company shared what the future of the service could be. These vehicles will initially have a pilot, but the aircraft could be autonomous down the road. The craft will carry up to four passengers. Uber calls this vessel an electric vertical take-off and landing vehicles common reference models or eCRM.

The aerial cab has four propellers for a vertical takeoff and a single rotor on the tail for propulsion. The flying taxi will get you to your destination pretty quick because it will have a cruising speed of 150 mph to 200 mph. The aircraft will fly as high as 2,000 feet. This aircraft will be electric to be quieter, more fuel-efficient, and cheaper than a traditional helicopter.

But don’t expect to take a long distance trip because the battery can only last up to 60 miles before needing to be recharged. Uber said the battery can be fast-charged in only five minutes. Uber plans to build thousands of rooftop “skyports” to recharge the eCRMs and load passengers. Uber expects the skyports to accommodate up to 200 liftoffs and landings per hour.

“The eCRM design is pedestrian friendly, as the propeller blades are as high as possible, leaving ample room for individuals to board and de-plane without having to duck,” Uber said in a statement. “The high placement of the wings provide shaded entry into the cabin, shielding riders from light rain as they board. Finally, point of entry into the eCRMs is limited to one side, simplifying ground crew operations and reducing confusion for riders when they approach their eVTOL vehicle.”

Uber envisions eCRMs to be used in an urban environment where passengers can be transported across the city to avoid traffic jams. “We want to create the network around those vehicles so regular people can take these taxis in the air for longer distances when they want to avoid traffic at affordable prices,” said Uber CEO Dara Khosrowshahi. Uber wants to have working eCRMs flying in the air over Dallas, Dubai, and Los Angeles by 2020.

However, not everyone is a fan of having a fleet of flying taxis overhead. Tesla CEO Elon Musk pointed out the negatives of having thousands of flying drones in the air. Not to mention that Uber hasn’t worked out driving on the ground yet. In March, an autonomous Uber vehicle ran over and killed a pedestrian in Tempe, Arizona, because of a software bug.

Also at the Uber Elevate Summit in Los Angeles, California, Uber announced that they are partnering with the U.S. Army. The collaboration between the ride-sharing company and the U.S. Army Research, Development and Engineering Command, Army Research Lab to develop rotor technology. The partnership will also allow the Army to test vehicles on Uber’s urban aviation rideshare network. Uber and the Army’s research lab are expected to equally spend a combined total of $1 million for this research.