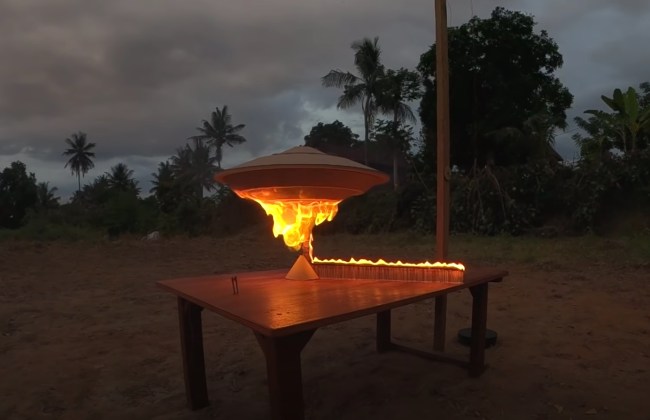 Sadly, I was unable to watch Will Smith in Independence Day on the 4th of July this Summer because I was too busy crushing beers in the pool from sunrise to sunset but I can still recall pretty much every tiny detail from that movie having seen it countless times over the years. Watching this clip below, all I could think about while watching the UFO launch is the alien ship exploding the White House.

This guy harnesses the strength of 25,000 ordinary matches to build a UFO that actually flies and by ‘flies’ I mean it sends out massive hypnotic flames in every direction and explodes into outer space unlike anything I’ve ever seen with an at-home DIY project.

You don’t really lose much by watching this video on 2x speed on YouTube, that’s how I ran through it. The video is only 4min25sec long to begin with but you can power through it in nearly half the time if you speed it up until the UFO takes off. There’s some sick slow-mo HD footage of the matches exploding and the UFO taking off that I could watch all day.

I stumbled upon this clip over on DIGG. I’m not familiar with The S YouTube channel until now but if it’s more videos like this one then I’m definitely on board with this channel going forward.

Here’s another video from The S channel where they used matches to create a match-powered cardboard double jet:

All of this has me wondering how many matches you have to order online before you end up on some sort of watchlist. There has to be a threshold for that, right?