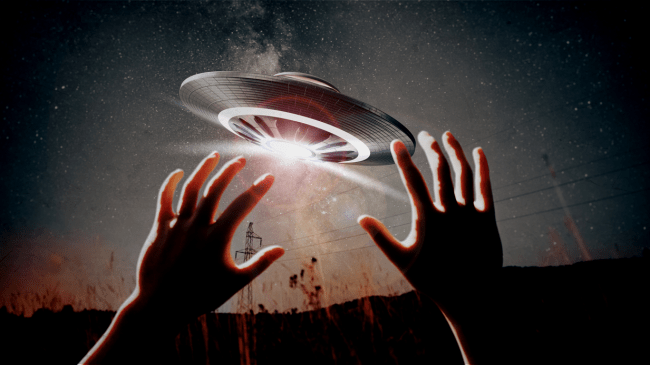 Stick a pin in the city of Kyle, Texas, located in Hays County, because on multiple occasions over the past few months a strange UFO has appeared in the sky and no one has an explanation for it.

One witness who has captured video of the UFO, Sal Sanchez, says he saw it back in January.

“I just walked out and saw this strange light in the sky,” Sanchez told Fox 7 Austin back then. “I was looking around at all the planes in the air like, ‘Is anybody seeing this?’”

Then, this past Sunday night, he saw it again and said it put on a “light show like you wouldn’t believe.”

“You had to have been here to see it,” he said. “There was one right after another.”

Related: F-18 Pilot Says He Locked On To Infamous UFO, Thought It Was ‘Part Of A Training Exercise’

Sanchez’s daughter also claims to have see the same UFO.

“My daughter saw it another time,” said Sanchez. “Two that were coming south to north met up with one that was going north to south, and it turned around and followed the other ones back.”

He says that due to the low altitude and lack of sound the UFO emits he doesn’t believe that it is a drone.

“If it is something that is not of this world, why here in Kyle?” he asked.

Despite multiple appearances, there still is no explanation for this mysterious UFO

Jane Kyle, a UFOlogist who has been documenting UFO sightings across the state for more than 10 years, offered her assessment of Sanchez’s footage.

“I’ve seen a lot and this video intrigued me,” she told Fox 7 Austin.

“My first thought was that maybe this is a Chinese lantern, but it is definitely not. The video goes for over a minute, the light is solid the whole time and it looks to be moving intentionally.”

She too dismisses the idea that the mysterious lights are being caused by a drone.

“It would have to be a very expensive, advanced drone,” said Kyle. “Drones can fly like 400 feet, pretty high up there, and there are some advanced drones that can go like 100 miles per hour.”

She also pointed out that similar UFO sightings occurred well before 2006 when drones were officially allowed to fly in civilian airspace there.

“It’s very possible that this is not anything that we’re familiar with,” she added.