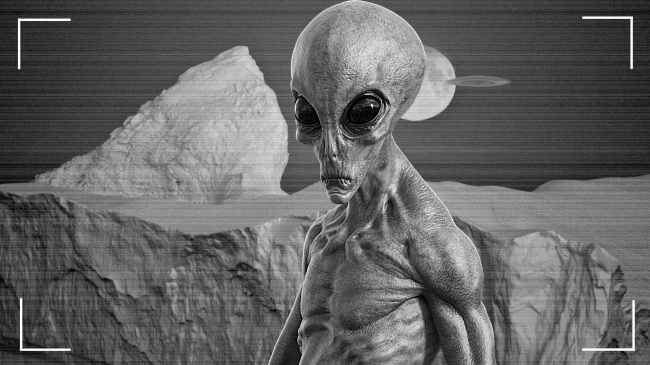 The four most common places that aliens use for their bases on or nearby Earth are alleged to be underwater, inside of volcanoes (preferably active), on the moon, and the frozen tundra of Antarctica.

The reasoning behind these choices is thought to be because they are all places where (1) most human beings will never, ever look, and (2) even if they did, it would be very difficult to do so.

One prolific UFO researcher, Scott Waring, has been studying these locations for years and recently made another potentially significant discovery.

Waring writes on his website that he was perusing Google Earth doing his usual investigations when he came across “something strange.”

While scrutinizing this discovery, Waring says he also noticed something else.

“Also I found the face of Jesus near the the excavation site,” he writes. “The face is that of a male with long hair, beard, mustache, long face, and a crown of thorns around his head. Not to mention that his eyes, nose chin and cheeks all clearly showing.

“These two location are also close to a standing dark figure I found last year on the snowy mountains. It’s the figure of huge bipedal being that could only be alien.

“It can’t be just a coincidence that all these pieces of evidence are so close to each other. I believe they are all related and build on the theory the ancient aliens once inhabited Antarctica.”

Waring also astutely points out, “Jesus was an alien who came to Earth to instill morals and rules to help a chaotic early humans rise to enlightenment.” He also added in the comments to the video below that he “may actually be son of God too. Both could be true.”

Viewers of the video below were not told who he believed the face is, but multiple people commented that it is Jesus.

Waring also, in a reply to commenter, explained, “the landing strip and trailers are for humans, but clearly they are digging up the hill area that contains some huge underground structure. That structure I believe to be alien. It’s US military going after alien tech.”

Another commenter, who Waring agreed with, wrote, “If it was newly made they would have covered it completely, but the structure might be an alien ship that they couldn’t lift up and transport, so they covered it for now, but the wind keeps uncovering its tips.”

Take a look and see for yourself what’s going on down in Antarctica.