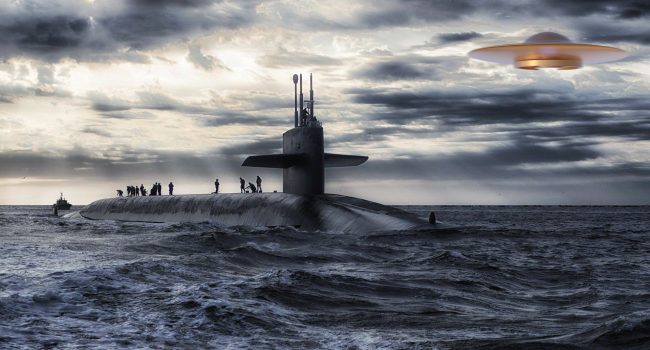 If you have been keeping up with our ongoing investigative reports regarding the existence of UFOs and aliens over the past few years, then you are very well aware that aliens have a handful of preferred, difficult to enter locations for their bases here on Earth: inside volcanoes and underwater.

So it should come as little surprise that as the Pentagon prepares to release its report on military UFO sightings, Washington Examiner columnist Tom Rogan has revealed that the United States Navy “has the data” that shows their submarines have detected mysterious high-speed crafts underwater.

This news comes on the heels of a Pentagon spokesperson admitting that the United States government’s Unidentified Aerial Phenomena Task Force has been investigating recent UFO photos and videos leaked by documentary filmmaker Jeremy Corbell.

Speaking about the footage, Rogan told Fox News’ Tucker Carlson, “I think what we may well be looking at a true unknown. Which is to say, intelligently controlled machinery that is not understood to be in the possession of the United States, China or Russia, which are the most three most advanced countries in terms of military aviation.

“Researching this, there isn’t anything that we have, top secret information about what China or Russia have or what we have at Area 51, that can do what these things do in terms of the variable performance.

Related: Japanese Defense Minister Issues Official Protocols To Military For UFO Encounters; Do They Know Something?

“Specifically relevant to this video,” Rogan continued, “in the coming months and years an area we will learn more about is the interaction between US Navy submarines – nuclear ballistic submarines and attack submarines – picking up sonar contact of things moving at hundreds of knots under the water.

“So there is an undersea dimension to this that the Navy has sort of pushed off to the side as the pilots talk more about their experiences.”

When Carlson questioned Rogan’s claim of these crafts’ high rate of speed, Rogan replied, “That is what I have heard from sources, very good sources, and the Navy has the data.”

Rogan added another, rather ominous, statement.

“One of the things we’re going to find is that over a period of decades a lot of the data, a lot of the measurement of these things, has been put off as a technical aberration or essentially a data malfunction because they didn’t want to really admit that something very serious and special is going on.”